Ghost Hawk is an unusual, inspiring and sad story about two friends, a clash of cultures and ghosts. I loved it. 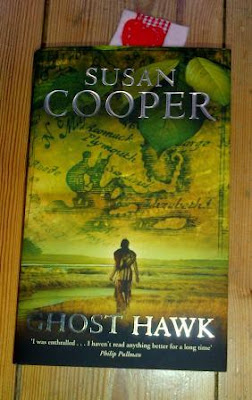 Little Hawk is a Pokanoket Indian. John is a British immigrant in America. They live different lives in different, and sometimes conflicting, cultures. A couple of chance encounters mark their friendship and seal both their fates. Coincidentally, at age eleven, they both go on different journeys. John’s journey becomes a story that he must keep secret or risk being branded a witch. The narrative combines both John and Little Hawk’s stories but is told just from Little Hawk’s point of view.


The friendship between Little Hawk and John is so vivid and beguiling, you can almost touch it. It is a fictional friendship that I will remember for a long time: in some ways, it gives the poignancy of Code Name Verity’s Maddie and Queenie’s relationship a run for its money.


A fantastical story about an unlikely and tricky friendship, Ghost Hawk is also a story about early British settlement in North America and how something as simple as living together – be you beast, human, or earth - can be so complicated and devastating. The novel is set in the mid 1650s around the time when the first British people started to settle in North America. It draws on a large amount of historical research and some of the subsidiary characters’ names are taken direct from history.


The first two sections of the novel are its strongest and my favourite. The first section is good and exciting and interesting and then – shockingly! - it changes. An anticipation for what is to come falls beautifully into place for the reader and the story starts to weave many strong threads together. The last few sections draw the stories to their necessary and neat closes.


Themes in the novel include the way we treat the earth: as a resource or as its own living entity; cultural clashes; colonialism; religion and beliefs; and friendship. There were plenty of lines in the novel that made me stop and think. Things like the need to extend warmth to those who live beyond the family. But, above all that, Ghost Hawk is glorious storytelling.


The tone of the novel is gentle and reminiscent of ThingsFall Apart. In many ways, it reads like a Things Fall Apart tale for current day children and pre-colonial America. The intertwined histories will also likely appeal to many fans of Nick Lake’s In Darkness. There is death and a few violent scenes (though not gratuitous or entertainingly enhanced) in Ghost Hawk but the graphic violence is not as vivid nor as sustained as In Darkness, making it more suitable for a younger audience too.


I added a ‘you should read this’ tag when I highly recommended this novel to Little M. It’s one of the best stories I’ve read for a long while. Whether you like history, epic adventure, great characters or light fantasy, this is an enthralling story whichever way you look at it.

Publication details: Bodley Head, 29 August 2013, London, hardback
This copy: received for review from the publisher
Posted by M at 3:00:00 am