Yes - I met Margaret Atwood! I asked her a question, two actually! She signed two of my books (hardbacks of MaddAddam and The Handmaid’s Tale)! 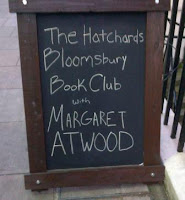 This all happened at the Hatchards Bloomsbury Book Club event in London, Friday 30th August. I’d bought a ticket – which was posh and arrived in the post. Included with the ticket was a glass of wine (redeemed at the event!) and a hardback of MaddAddam direct from the publishers and fresh off the press (that arrived by post well in advance of the event, so I had read it).


There was storytelling at this event.
There was no singing.


MaddAddam is the third book in a trilogy, preceded by Oryx and Crake and The Year of the Flood. I’ll write about MaddAddam in a separate post but suffice to say at this point that it is very, very funny. In many ways, it the funniest of Atwood’s book that I have yet read. Fittingly, the evening started and ended on a funny note. 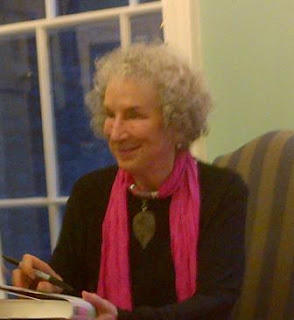 The first thing Atwood said to us was that she’d won the Swedish Humour Award. For this, she was given a glass bowl except she’d never received the bowl because, en-route to her, it had been...stolen. So, she’s not actually sure whether she received this award or not!

When she was signing my books I suggested to her that I thought she might have had a lot of fun writing MaddAddam. She looked up at me and smiled: “Yes, I did” she said, and signed away.

I asked her a question about ‘singing’ in MaddAddam. Plotwise, it’s quite a significant activity both for Zeb (whose ditties go back to an abusive childhood event) but especially for the Crakers (whose singing is a between- and cross-species communication), but its portent is lost on most of the characters for most of the novel. Atwood said that Crake tried to rid the new humanoids (Crakers) of singing and storytelling but that he failed. She suggested that singing and storytelling are part of humanity’s (or societies’) core. She thought that Toby and Blackbeard may have been irritated by the Crakers’ singing because it interrupted the storytelling. In Toby’s case, the praiselike singing that followed any mention of Crake’s name was also bound to be annoying (read the trilogy to find out why).


That was all I asked her.

On to everyone else. 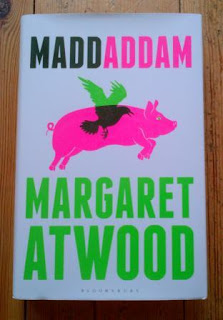 She started writing the trilogy with Oryx and Crake in 2001 after seeing a cassowary when she was in Australia. This was very exciting for me because  I also saw a cassowary in the wild in Australia. I didn’t start writing a book though. She wished she could lie and tell us that she knew the story would stretch into a trilogy etcetera, but she couldn’t and didn’t. When she finished writing Oryx and Crake she knew there would be many questions asked and that’s why there are further books. Who was the grand master of MaddAddam? We want to know more about Zeb. And so on....


Many of the questions were ones that are repeatedly asked of Atwood. The science fiction versus speculative fiction issue (Atwood continually insists that her writing is not science fiction). For her, it boils down to doing what it says on the box. It’s about “accurate labelling”. If she sees ‘science fiction’ on the book cover, she expects to find outer space in the story – but if it’s not there, she’d be annoyed. Most of her novels are not in outer space. For me, science fiction doesn’t signify spaceships.


She was asked a question about her thoughts on a trend in fiction relating to reproduction and resisting technologies. Her answer was “Oh, I don’t know”. But she then preceded to talk about how this wasn’t actually a new trend anyway. She went on to say how questions about reproduction always come into stories about alternate worlds. And, having referred to the Crakers as not being plagued by our “romantic ills” she later responded to a question about whether she really believed in a society that did away with romance.  She suggested that fiction often finds that we don’t like “designed societies” because we like “serendipity and choice”. And about utopias that ask “How do we do things better? Then you get down to the nitty-gritties.....” She ended this with a little smile.

Some interesting facts about Margaret Atwood:

Email ThisBlogThis!Share to TwitterShare to FacebookShare to Pinterest
Labels: authors, event, we sat down