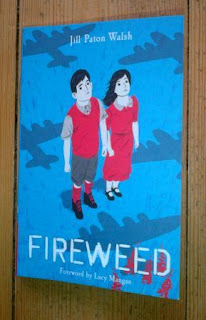 Bill and Julie meet each other in a chance encounter at Aldwych underground where they are sheltering during an air raid in 1940. He is fifteen. She is maybe slightly younger – or not. Both are runaway evacuees who have returned to their home city: London. They don’t see it as dangerous and they want to stay there. But, this means they have to live without adults, without ration books, and without a place to stay. Their best chance of survival, literally and as independent children, is to pair up and become a team. They think holding hands will make them look like brother and sister and make them less conspicuous....


Fireweed was a very quick read with a lot of description, and it was quite unusual (for us). We would recommend it to readers interested in what central London looked like during the Blitz. It often felt a bit like a tourists’ guide around central London, especially the area around the Thames and Embankment. Little M liked this aspect of it and felt that it made the novel seem more real.


Overall, what did we think?
Both of us agree. It started off really well, then it became a bit dull, then it livened up and then it ended a bit suddenly. The novel left us a bit uncertain and we didn’t quite get the point although our discussions were interesting (the joy of discussing books together). We decided that some people might say the point of the novel is summed up in the final paragraph about fireweed. On reflection, the novel may be about letting go. Some readers may find this poignant.

Here are some questions we asked ourselves and discussed together. Be aware that these contain some small plot spoilers but nothing that big.
Why is it called Fireweed?
We think this is summed up in the last couple of pages and refers to things like a city/nation/world/individual that has been damaged by fire and flame but heals over and can grow again.


Did we believe in the characters?
Little M: I believed in Bill the most but Julie was difficult to figure out. Also, sometimes she seemed like she was five and sometimes she seemed like she was thirty!
M: I agree. I didn’t really believe in the characters – perhaps I did Bill. They were a bit stilted. It was going alright up until just before Dickie (when they take refuge in the bombed out house). Then it starts to sound like they’re playing grown-ups in a romanticised way rather than being children who are living independently because they don’t want to be sent away.


Little M: Bill is not his real name. Why is it never revealed?
We don’t know. We could hazard guesses.

Were Bill and Julie in love?

M: I don’t think so. Bill perhaps develops an infatuation but I think more than anything, they’re dependent on each other for everything.
Little M: I think Bill was in love but I’m not sure about Julie.