It’s Leonard Peacock’s eighteenth birthday. He’s on his own, he’s wrapped four gifts in pink paper as parting presents for four people, he’s quite distraught about his life, and he’s planning on taking a gun to school. Tough stuff and the gun business put me off at first. If you feel similarly to me on that, persevere like I did: it could go either way for you. 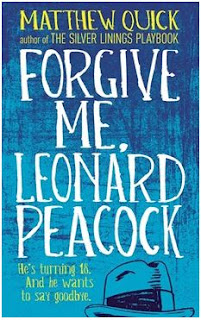 This novel reminded me of two things: The Catcher in the Rye (novel) and The Perks of Being a Wallflower (film adaptation since I haven’t read the novel – but Little M has). Despite the miserable and uncomfortably controversial subject matter, Forgive Me, Leonard Peacock is a very thought-provoking, quick and compelling read – and remarkably, its tone is light (Warm? That really depends on you!).


The narrative structure is slightly unusual. Leonard’s first person narrative takes us inside his head as he tells us his thoughts as his eighteenth birthday progresses. This is enhanced (perhaps?) by footnotes at the bottom of the pages. These do provide background information and some deeper digressions into something he has said or thought. I skipped a fair amount of them – the type was small and I’m not a footnote fan.  These first person accounts of Leonard’s eighteenth birthday are interspersed with some letters from people who’re operating a lighthouse in the future. These letters are interesting and intriguing at first, then their raison d’être becomes clearer and finally they add an extra touch of ambiguity to the novel. For me then, they worked well and add a bright spark of debate to the novel’s end.


Forgive Me, Leonard Peacock bears many similarities to The Catcher in the Rye, which I reread recently. Both novels deal with identity, alienation and mental health issues for ‘gifted’ teenage boys and character comparisons between Leonard Peacock and Holden Caulfield (the main character in Catcher) are easy to make. Forgive Me, Leonard Peacock is an extra-ordinary day-in-my-life novel and similarly, Catcher is an extra-ordinary weekend-in-my-life novel. Other elements of the plot (hotels, girls, suicidal thoughts, absent parents) and some caring adult characters (an elderly man and a male teacher) also share parallels with Catcher (Herr Silvermann, Leonard’s holocaust teacher, is a great character with an interesting story of his own).


Like Salinger, Matthew Quick has deployed contemporary speech usage to denote similar things nad these bounced out at me. For example, Leonard is surrounded at school by ‘ubermorons’ while Holden was burdened with ‘phonies’. As a reader, if you weren’t sympathetic to Holden, you’re probably not going to be overly sympathetic to Leonard either (although his story provides more ‘justifications’ for his actions than Holden who was arguably just a lot more selfish).


A significant difference between the two novels is in the plot details and sub-plots. To me, Forgive Me, Leonard Peacock is much more about suicide, bullying and sexual abuse whereas, The Catcher in the Rye is more about grief and social class. For me, Forgive Me. Leonard Peacock also stresses the need for tolerance of difference much more – and maybe even forgiveness.


I think I preferred The Catcher in the Rye (partly because of it's lighter subject matter, it's clean monologue and it's my classic read from my teen years) but mature teen readers today may prefer Forgive Me, Leonard Peacock. It addresses contemporary issues in a hardhitting way but at the same time it is also funnier and softened by what I think is occasional and well-placed sentimentality: nothing ubergooey, mind you, and it is definitely not a soft novel.


Publication details: Headline, London, 15 August 2013, hardback
This copy: uncorrected proof received for review from the publisher
Posted by M at 6:00:00 am