I first read Things Fall Apart at university for African Literature. It was possibly the first novel I’d read that was written by a black African author. The novel recently reappeared on my bookshelves after bringing it back from my attic bookhaul earlier this year (some of you might recall this event!). What prompted me to read it now, however, was We Need New Names, a new and wonderful novel by NoViolet Bulawayo. 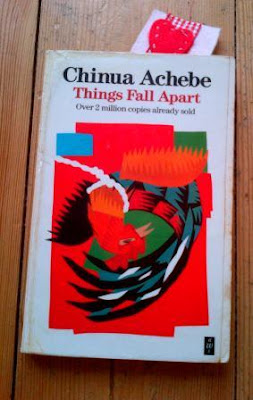 Things Fall Apart is a tragedy: a tragedy about an individual, a tragedy about a village and perhaps a tragedy about colonialism. Set in pre-colonial Nigeria, it tells the story of Okonkwo, a proud and successful member of his tribe. The novel describes the tribe’s way of life, their (almost) unflinching adherence to their religion and patriarchal values. However, the novel also introduces questions that cut right into how we perceive our own and other cultures. At the forefront of this are differences about individual will versus the will of the gods as well as group will, justice, and sorrow. What comes out most strongly in Things Fall Apart is the suggestion that without missionaries and further colonisation, the tribes, as any other group of people, would have developed in their own time and ways – who knows what our histories would look like if that had happened? Achebe makes it clear that individuals in Okonkwo’s village were starting to mumble about the ways some things were done: for example, killing people simply because the gods said so or abandoning twins. The novel makes an effort to point out that cultural interpretations vary even within countries and that what is an atrocity ‘here’ might not be considered an atrocity ‘there’.

It is a highly enjoyable and gently compelling re-read and I think I got much more out of it this time. The writing style is quiet and quite different to many contemporary novels and especially 'western' novels. Some people criticised Achebe for writing in English but I'm in the camp that thinks this was a far-reaching move and achievement for both literature and cultural thinking.

Comparatively then, how did I view Things Fall Apart and We Need New Names?

Things Fall Apart was first published in 1958 and is set in Nigeria just before colonial times (probably late nineteenth century), around the time that the first European missionaries moved in. We Need New Names was published in 2013 and is set in Zimbabwe and the USA post-2005. Both novels are written in English and their authors are both African by birth.


About halfway through Things Fall Apart, Ekwefi (one of Okonkwo’s wives) tells a story about a tortoise and the birds who have a feast in the sky. I think that NoViolet Bulawayo has borrowed from this little story and weaved it into We Need New Names. There are other scenes, images and thoughts in Things Fall Apart that make the two novels interesting for parallel reading most notably in how different groups of people (towns, tribes, nations, religions, races) respond to other cultures and about tolerating (or not!) their vastly different ways of life.


What both novels do well is to lay out the beautiful and the ugly nitty gritties that underpin the rules and regulations and daily functioning of specific communities and cultures. In Things Fall Apart, Okonkwo is not the most sympathetic character and there are many views and actions that may grate on your personal worldview. And that’s the point. Covering a century of time, reading these two novels together is a wonderful experience. In some ways, it's a tragedy that  hundreds of years later, there are still so many overlaps.


A little heads up especially for younger readers: Susan Cooper’s Ghost Hawk is set in the USA and has many parallels with Things Fall Apart too. Adults who have an inclination towards comparative reading and discussion might want to check that out too.

Things Fall Apart is also on our Classics Club challenge list. Little M and I have been drawing our own conclusions about what we think a 'literary' classic is. Of course, Things Fall Apart has its feet firmly planted in the African canon and has made tracks in European and American canons too. Our own 'canon' is more about whether we enjoyed some aspect of it enough to recommend it to readers from another generation. Things Fall Apart ticks the box for me.