We sat down for a chat....with Annabel Pitcher


We both loved My Sister Lives On the Mantelpiece and Ketchup Clouds, so we were delighted to ask their author, Annabel Pitcher a few questions!

Little M: Do you have a specific religion (this question was inspired by My Sister Lives On the Mantelpiece)?


Annabel Pitcher: I was brought up as a Christian in the Church of England, and spent every Sunday at Sunday school. I really enjoyed it, actually, and the church was an important part of my life. I loved the sense of peace and the chance to reflect on the week that had passed and the mistakes that I might have made. As an adult, I am not really sure what I believe. I haven’t turned my back on the church, but I am in the process of trying to work out what I think about God.


Little M: In Ketchup Clouds, do you think Stuart (who is on Death Row) even received the letters? 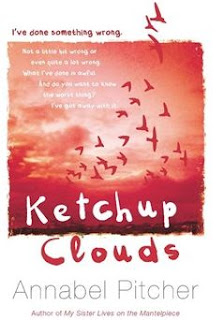 Little M: Do you have a pen pal on Death Row? Or do you even have a penpal?


Annabel Pitcher: When I was a teenager, I did write to a man on Death Row. I got involved in a pen-pal scheme through Amnesty International, which encouraged people to befriend inmates to give them a social outlet. I only wrote to him a few times, but it was a fascinating experience. Because I didn’t know him, and had no chance of meeting him, I found myself being brutally honest about my own life in a way that I couldn’t necessarily be with friends or family. When I remembered this experience while planning Ketchup Clouds, I knew that my character had to write to a man on Death Row.


Annabel Pitcher: Hahaha. Yes, I do! Not as much as my husband, though. He eats it with everything!


M: Absent mothers is a theme that appears in both of your novels to date. In Ketchup Clouds, this comes to the fore when an absent mother is blamed for causing indirect harm to her child. Is this a topic that is important to you?


Annabel Pitcher: I am fascinated by parenthood, so it is a theme that I am drawn to. Inevitably, when you’re writing a coming-of-age tale (which I tend to do) you have to talk about a child’s relationship with their mum and dad because it’s so integral to their experience of growing-up. Often, a teenager matures when they realise that their parents are just people who make mistakes, rather than perfect individuals.
******

Annabel Pitcher has received many nominations and awards for her debut novel, My Sister Lives On the Mantelpiece, and her second novel, Ketchup Clouds is out now.

You can read our reviews of My Sister Lives On the Mantelpiece and Ketchup Clouds.