A dusty blast from the past

Last summer, we spent weeks travelling and reading children's classics with our family. This December, we chose to leave winter behind and went south (a bit like a pilgrimage) and became ensconced in some very old, boiling hot, and sometimes dusty reads.

First stop was a farm in Nieu Bethesda which is a little dorpie (village) in the South African Klein Karoo (the Little Karoo). It's surprising how booky this stop turned out to be.

Historically, the Afrikaner vootrekkers moved north from the Cape using ox-wagons. Lots of the furniture and obejcts in the farmhouse dated back many years. We found this in the dining room. I'm punning now, but if you take a look at this bible, you might not be blamed for saying that their religion sometimes weighed heavily upon life in the Karoo! 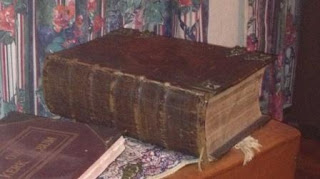 After a visit to Helen Martin's Owl House, we found Dustcovers, a little secondhand and antiquarian bookshop. 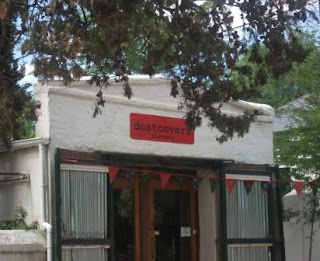 I knew exactly what I was looking for: The Beadle by Pauline Smith. The story is set in the Little Karoo and I'd read it as a setwork at high school. What better time and place to buy and re-read it than in the story's original setting!  And I was also given a copy of Athol Fugard's play, The Road To Mecca, as a gift from my parents. The thing about this play, is that it is inspired by Helen Martin and her Owl House. You can see a picture of the sculputures that adorn her garden on the front cover. 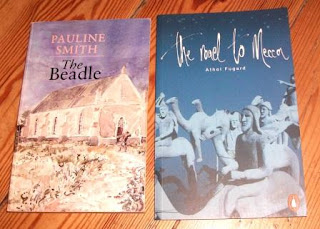 Little M also picked up some old books in Dustcovers: The Red Pony by John Steinbeck, The Green Grass of Wyoming by Mary O'Hara (the third in the Flicka trilogy), Stormy: Misty's Foal (the Stormy Breyer model has passed down a couple of generations in our family) and The Secret of Shadow Ranch which is the first Nancy Drew title by Carolyn Keene. 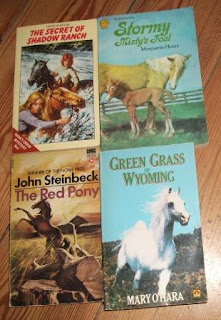 Next stop, was the attic housing boxes of books from my childhood. Boy was it hot up there. The kind of heat where you can hardly breathe and just being there brings on a drenching sweat. But it was worth it. Here's a small selection of what I found: 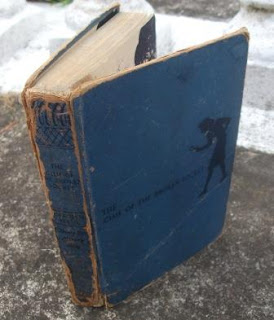 The Clue of the Broken Locket by Carolyn Keene (Nancy Drew). I'm not that old; this book was secondhand before I got it! What's interesting about it is I also had a paperback version of it. However, the two stories were completey different. What a mystery that was to me when I was younger. I loved that! 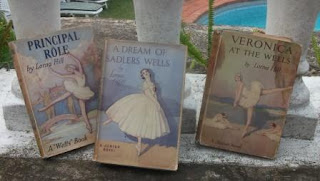 A selection of Lorna Hill's Sadlers Wells ballet stories. Again, all secondhand before they came to me. This copy of A Dream of Sadlers Wells was Nanny Bee's and she's still very proud of the school book prize plate that's stuck in it. This one came over in my hand luggage. Also, note our method of cooling down in the background! 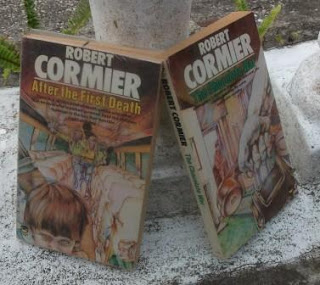 I knew I had them still. The Chocolate War and After the First Death. Two of Robert Cormier's classic Young Adult/teen titles. Definitely worth a re-read. And I've always been fascinated by those cover illustrations.

Before we went on this trip, I jokingly said to someone that we'd do a wild booky post but that hopefully it wouldn't be deadly. Um, well....it wasn't quite deadly, but jeez Louise! We'll leave the rest of that story for a later time!
Posted by M at 10:51:00 am

Email ThisBlogThis!Share to TwitterShare to FacebookShare to Pinterest
Labels: African, bookshops, classics, family, we sat down