When we started this blog, one of Little M’s dreams for it was that it would be some sort of book group. So, when Hot Key Books offered reading group book copies of Sarah Mussi’s Angel Dust, we were delighted. Little M organised the rest.

The book group included three 12 year old girls and there was no adult involvement. They all read the book and two of them got together during the summer holidays to discuss it. The discussion and feedback is their own. This is not our usual kind of review but is the feedback from the book group discussion.

Those of you who’ve ever been in a book group will probably smile – the conversation threads about the book often aren’t what you were expecting! And the discussion that continued after this post was typed up went on for ages about books and all sorts of other things......

So, what’s Angel Dust about? 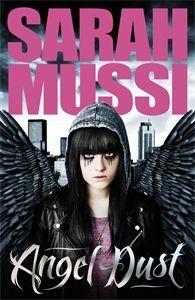 What the publisher’s say:

Would you move heaven and earth for the one you love? When an angel is sent to earth to escort the soul of a young man to the afterlife she chooses to save him instead. But at what cost? An urban love story that recalls Romeo and Juliet by an author with a distinct teen voice.

What our We Sat Down teen book group said:

This book is about an angel called Serafina who is a death angel and she collects the souls from people who have just died. She has to ask these people whether they repent. If they do not, they go to hell. If they do, they go to heaven. She takes them to the gates of heaven or hell and then they’re on their own. Serafina acts like a human but has the powers of an angel.

There is a lot of romance, quite a bit of paranormal and a little bit of adventure. There’s quite a bit of death. The whole story is based around someone dying.

We liked the fact that the angels had to get to the dying person before the devil did.

Little M: “This book did make me think what if angels of death were real? And what would it be like when you are dead?”

Alice: “It made me think about angels. Are they real or are they not?”

Little M: “I found the story too jumpy. Like one minute Serafina was there and the next she was somewhere else. Altogether it was a good book, but not really up my street.”

Alice: “I thought that it did jump a little bit but not enough to throw me off the storyline and for me to not know what was happening. Summing up, it was a good book and I loved it.”

This copy: Uncorrected proof received from the publishers for reading group use