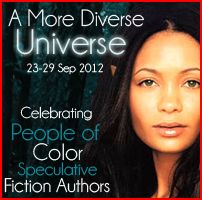 Aarti at BookLust is hosting A More Diverse Universe blog tour which celebrates speculative fiction written by people of colour.

The reason I've chosen Noughts & Crosses is for three reasons:

1) It's a book that really gets under my skin because although speculative, much of the material in the book is based on past and current happenings (just switched);

2) No matter how often I remind myself that Noughts are white and Crosses are black, in my mind's eye, I flip them back. Just an observation......;

3) New editions for the four book sequence have just been published in the UK and the new jackets are still quite stark but with a splash of colour and more grit. Covers that, in my opinion, reflect the content of the novels perfectly.

Here is the link to my earlier review of Noughts & Crosses, the first book in the sequence (you'll see how the cover has changed too).

You can find out more about Malorie Blackman on her website.
Raimy-Rawr has been running a Noughts & Crosses week on her blog, Readaraptor.
This the schedule for A More Diverse Universe Blog Tour 23-29 September 2012.
Thanks to Corgi (Random House UK) for sending me copies of the sequence.
Posted by M at 12:00:00 am