Summer venturing with a world of stories

If you've been following our blog this August, you'll have noticed we've been reading a selection of titles (or authors) from the new Vintage Children's Classics range. The pages from those books seeped into our real lives. Here are some highlights from our adventures.

We left I Capture the Castle, and Barnaby Brocket tempted us to further shores. Little M closed the last page on Emil and the Detectives, and in Olympic speech, handed the baton to Daddy Cool. Then off we went, Emil and The Detectives and Swallows and Amazons safely tucked into backpacks and book totes (along with a few snacks).

Not having read Swallows and Amazons before, our sailing competencies were rather lacking, so we put our trust in a big engine and some natives.

We left Little M with a whole bunch of wannabe Swallows and Amazons, and off we went (that's M and Daddy Cool) - two adventurous natives hoping not to be robbed on the train. We avoided Berlin (if you haven't read Emil, that's a literary joke)!

If John Boyne's The Terrible Thing That Happened to Barnaby Brocket urged adventurous travel, the Verzets Museum was a little more sobering and came full circle back to Boyne's The Boy in the Striped Pyjamas. This Amsterdam museum tells the story of the Dutch resistance to the German occupation during World War II from the perspectives of many different individuals.  I was quite taken aback when a pair of blue striped pyjamas was one of the displays. Yes, they were real. Spine-chilling moment.

Back on less wobbly territory, again we took to the trains and trams and made for the Once Upon a Wartime exhibition at the Imperial War Museum North in Manchester.


Here's a page from the museum's Once Upon a Wartime activity booklet for The Silver Sword: 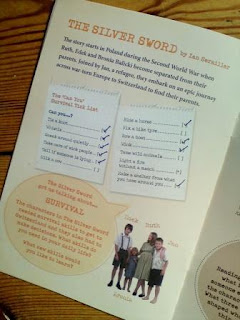 To cap the summer off, we communed with nature, got very wet but kept our clothes on (unlike Topaz in I Capture the Castle!). We picked up some oars and paddled across Coniston lake where much of Swallows and Amazons is set. We stayed at the southern end - I didn't want to end up in a war with those Blackett sisters (aka Amazon pirates). But we still spotted plenty of white and reddish brown sails - Swallow and the Amazon maybe?!

We hope you've enjoyed our summer world of stories. We've had a ball. Thanks to Vintage Children's Classics and their World of Stories for inspiring us and providing some of the books.

A recap of the titles reviewed during our world of stories series:


PS. Find out who the winner of our Vintage Children's Classics books giveaway is over here.
Posted by M at 8:11:00 am

Email ThisBlogThis!Share to TwitterShare to FacebookShare to Pinterest
Labels: book group, classics, event, family, we sat down, world of stories