This is our second In My Mailbox (to be honest, we don't have a mailbox).  This week we have five books. See if anyone can spot any similarities in the covers! 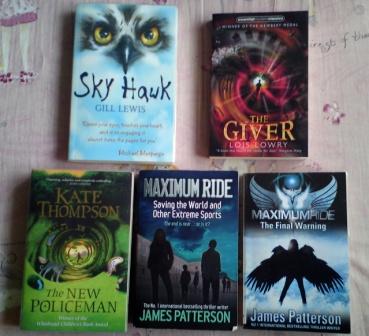 The first one is The Giver by Lois Lowry, bought with a World Book Day token.  This comes strongly recommended and we've found it on all sorts of lists.  Hailed by Harper Collins as an Essential Modern Classic and it won the Newberry Medal. It's the story of how even a perfect utopia can have its problems.  One of the earlier children's dystopias.  Can't wait.

Fourth is Sky Hawk by Gill Lewis and has also been borrowed from the library. Having read an excerpt on the internet, it looks great.  Animals (actually, Mina would like it - birds!), adventures and secrets in the countryside....fab.

Fifth is The New Policeman by Kate Thompson.  Also borrowed from the library, this was actually on the school's recommended reading lists for KS3.  JJ tries to buy his mother some time - that's sounds right up our street - and there's mystery, myth and magic in it too.  Sounds a bit science fictiony and fantastical.  Fabuloso perhaps?

And look who else has taken an interest in our books! 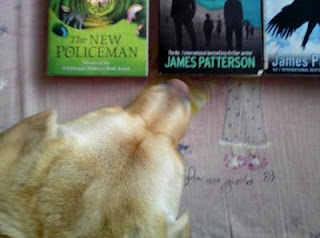 Have any of you read any of these books?  And what books did you get in your mailbox?

Email ThisBlogThis!Share to TwitterShare to FacebookShare to Pinterest
Labels: in my mailbox