Review - The Curious Incident of the Dog in the Night-Time

The Curious Incident of the Dog in the Night-Time baffled me before I read it. I’d seen it variously described as a children’s book and not. It’s spine in the bookshops suggested it could have gone either way but when I pulled it off, I literally stepped back with a sharp intake of breath. A red dog on its back impaled by a gardening fork? If ever there was a cover to put me off a book, this was one of them (See end of review for a newer cover!).

But the reviews on the whole were attractive. After all, it was an award winner and on all sorts of book prize lists. And the writing from page one was compelling.  Yes, this could work for adults and older children alike, I thought (quickly hiding the cover)…

…and then I read the whole book in a single sitting.

Mark Haddon’s The Curious Incident of the Dog in the Night-Time is narrated by fifteen year old Christopher Boone.  His behaviour probably falls somewhere on the autistic spectrum. After discovering a dead dog on a neighbour’s lawn, he starts to write a murder mystery novel.  Determined to find the murderer, Christopher lands in all sorts of awkward and difficult situations.  Seeing them through his eyes though, they make perfect sense and the rest of the characters’ behaviour towards him seems unfair and even unkind.

There were a few aspects of the novel that mesmerised me.  The poignant comedy (which I often find with first person narration) takes you along on Christopher’s journey.  And yes, his character develops but it is the increasing revelation of the adult characters’ darker sides that linger………

It is one of those reads that stays with you……uncomfortably.
Overall, I would recommend this as an excellent read – but not for children. There are words of hope - but they are just words. I did not really feel the hope. Yes, poor Christopher, will he ever feel safe again? But really, poor, poor Wellington. Dog lovers will want to call the RSPCA.

On second thoughts, the cover is appropriate. If it makes you gasp, your response as a reader may be similar to mine.

Publication details:
The Curious Incident of the Dog in the Night-Time, Mark Haddon, 2004, Vintage, London, paperback.

Our copy: purchased from an independent bookshop with the help of a £1 World Book Day token.

Okay, okay....but my eyes are closed!

*******
Note added 1 August 2012: Here is a new edition from the Vintage Children's Classics range. This front cover is a bit more pleasing to my eyes! 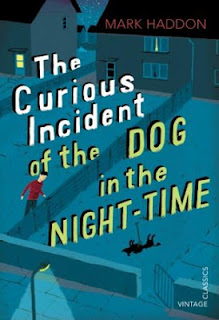