Bonjour! Aujord'hui...unfortunately, our French is not much better than that and today's post - with the help of Pushkin Press's translator - has moved from English to French and back again. We're delighed to welcome, Cendrine Wolf and Anne Plichota, authors of the Oksa Pollock novels. The first novel in the series, Oksa Pollock: The Last Hope, was originally written in French and has just been published in English for the first time and Little M thinks it's a cracker! 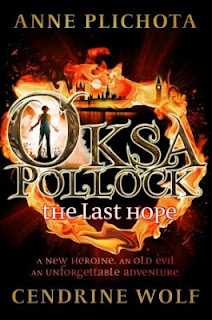 How did you both meet and decide to write the Oksa Pollock books?


Anne: Cendrine and I met 19 years ago at a mutual friend’s house. We immediately got along very well, became friends and this led us to wanting to work together. We share the same views on life, work and writing. Working together is not always easy but it does force us to give our best. It’s really stimulating!


Cendrine: I had the idea for the fantasy story of a girl when I was having a bath right before a New Year’s Eve party! It was so strong I talked to Anne about it (we stood in a corner ignoring everybody instead of joining the party) and off we went to start on the story.


Anne: We both had been wanting to write for a long time. We just needed an idea, a starting point to actually begin. Once we agreed on Oksa and her surroundings, we built the whole outline of the story together, created the characters and creatures, highlighted the key steps and the turning points of the story… and we started writing.


Little M:
What were your sources of inspiration?


Anne: Inspiration comes from everywhere around us, it’s constant and very intense, like a never-ending flow. What we see, what we hear, our imagination, dreams and nightmares, fantasies—everything contributes to what we create. Many things come from our daily lives and situations we actually witnessed or experienced, and we add to these our own pinch of craziness, fantasy and adventure. Imagination helps make difficult events tolerable and bearable. It’s like a pressure-release valve, because it suggests how things could have turned out differently. Here’s one random thought about this: one day we heard on the radio that human eyes can only see 5% of what goes on in reality. This means most of what exists around us is imperceptible for us poor human beings. We see this as an amazing opportunity to imagine what could be there!


Cendrine: Also, we totally accept and appreciate the link between our work and Harry Potter (whom we both love!). Without Harry, Oksa would never have existed. Harry Potter was the catalyst and we are extremely grateful to him for having… well, existed! Having said that, we must also recognise that the fantasy genre and stories of witches and wizards have always existed (just look at Homer’s Odyssey, for example, and all the myths and legends from around the world). It’s just that previously we talked about them less!


Little M:
When you were writing Oksa, did you think that it could be translated into English one day?


Anne: This is truly a dream come true! When Oksa was translated into Russian, Japanese, Swedish, Hebrew… (27 languages in total) we thought it was magical, but Oksa coming to English is the ultimate dream.


Little M:
Did you write the book for a specific age group ?


Cendrine: It’s often difficult to be precise about age and age-groups. Reading is such a personal thing! Let’s say that Oksa can be read from the age of ten upwards… with no upper limit! It’s a multi- (or trans-) generational story.


Little M:
Will there be an Oksa film, and will it be in English ?


Cendrine: The film rights have been bought by the production company SND, who made Twilight and Heavenly Creatures. That’s all we can say at the moment…