We Need New Names by NoViolet Bulawayo
Adult fiction review by M
This novel slipped its hands around my throat and the bruises won’t fade to pale that quickly.  I suspect it will never fully let go.


We Need New Names tackles the displacement that has become part of our contemporary global landscape.  Set just a few years back in post-2005 Zimbabwe, it is narrated by Darling, a 10 year old girl who lives in a Paradise shantytown shack and dreams of escaping to an American paradise.  The novel follows Darling and her friends until she is about fourteen (or fifteen) although there is a section that suggests it follows her for many years after that as the latter chapters follow a distinctly non-linear chronology. It seems appropriate to post this review during Refugee Week. 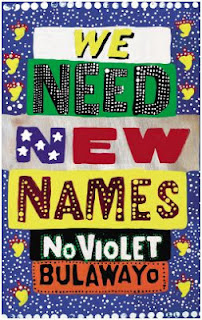 Wonderfully, this is a novel whipped with the complexities of African identities in a post-colonial and globalised world and its most compelling theme is that of contemporary displacement, a theme that will resonate with many readers. The formation of the informal settlements is the first displacement that takes place – in Darling’s life – and a few more follow. At some point the novel asks what is home and reminds us that when someone is talking about home we need to listen very carefully to hear which paradise they are actually talking about.  We Need New Names is not only about physical displacements of home, it is about lives, countries, systems falling apart until we don’t know which part of the broken Coca-Cola glass bottle we are. Where some books get under your skin, We Need New Names snakes right in and tugs at every essence.


Aside from displacement, We Need New Names will appeal to anyone interested in Zimbabwe. The novel deals with power and corrupt leadership, religious beliefs and customs, cultural mores, childhood values, land ownership, AIDS, race, language and the pains of self-imposed exile. It is a painful read with many disturbing scenes. Darling’s voice is occasionally reminiscent of Harrison in Stephen Kelman’s Pigeon English.


While this is up there with some of my favourite post-colonial African writing like The Beautyful Ones Are Not Yet Born (Ayi Kwei Armah) and Nervous Conditions (Tsitsi Dangarembga), intriguingly We Need New Names also reminded me of The Slap by Christos Tsiolkas (especially one chapter). Because the clause "things fall apart" repeatedly crops up in We Need New Names, I have also been prompted to start a re-read of Chinua Achebe’s Things Fall Apart (since writing this review but prior to its posting, I have finished the Achebe and highly recommend reading these two novels together. A parallel review of Things Fall Apart is coming up...).  Younger teen readers may like to read Now is the Time for Running (Michael Williams) which is a novel about similar issues around Zimbabwe and exile.

I’m very keen to see what NoViolet Bulawayo does next.


NoViolet Bulawayo left Zimbabwe when she was eighteen and now lives in the USA.

Some asides (may be a bit SPOILERY – but only a teeny bit):