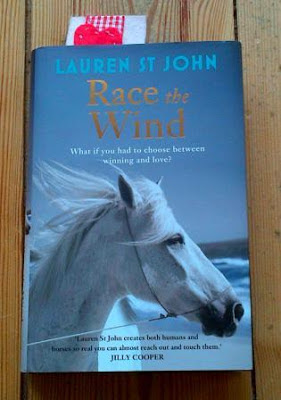 Race the Wind is the second novel in Lauren St. John's horse trilogy. Casey Blue and her horse, Storm Warning, have won Badminton horse trials and have been offered a place at the Kentucky three day event in America. Her father has been accused of a crime which he says he hasn't done. The evidence that show he has not committed the crime is missing. A blackmailer approaches Casey and says she and Storm must win Kentucky or her father will not be released.


I loved the plot and I think the little romance between Casey and Peter was really sweet. Lauren shows how a horse and a girl connect and trust each other. She also shows that when you ride horses there is a lot more to it than meets the eye. I didn't have a favourite character in this book but I found that they all were mostly believable but some were a tiny bit cheesy.


I preferred The One Dollar Horse which is the first novel in the series. This novel seemed to be aimed at a much younger audience than The One Dollar Horse, which is strange because it is the same series. I would recommend Race the Wind to 11/12 year olds, maybe a bit older because of some of the events which take place in the novel. But the style of writing seems to be aimed at a younger audience.


I would like to read the next book even though this one wasn't my favourite. I do love good horsey books.


Publication details: 2013, Orion Children’s Books, London, hardback
This copy: received for review from the publisher
Posted by M at 12:00:00 am