First of all, we’d like to thank Booktrust for inviting us to the Waterstones Children’s Laureate 2013 – 2015 Announcement on 4 June 2013, and particularly for asking Little M to be their young reporter for the day. The whole event was superdooperfabulastic! Look out for Little M’s blogpost about the event which will be posted by Booktrust. 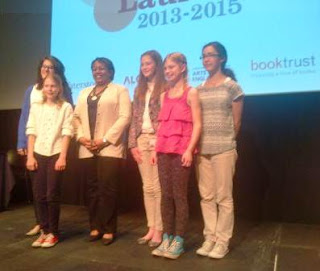 For those of you who don’t know, Malorie Blackman was announced as the 8th Children’s Laureate. Krishnan Guru-Marthy (Channel 4 news journalist) introduced the new laureate as someone whose time had come! These are my (M’s) brief thoughts on the day and Malorie Blackman in her new role.


In her acceptance speech, Malorie Blackman set an enthusiastic, energetic, vibrant and determined tone for her spell as the 8th Children’s Laureate. Based on her novels, we thought she had a good chance of being the new Laureate although we didn’t know if a writer whose books were predominantly for teens would ‘qualify’. They do!


Diversity is sure to be a key element of her laureateship not only in terms of demographics and life experiences but also in terms of genres and literary/storytelling forms and she made particular references to comics and short stories. Her aim is to make reading irresistible and to have “more children reading more.”


Just like her books, Blackman delivered a vocal punch and warned that she will be “championing public libraries” as it was libraries that both inspired her and “taught me to aspire..(..)..they made my own vision sharper and clearer, ” she said.


And then we went all Julia Donaldson style with time and had a bit of a squash and a squeeze: somehow between the Guardian kids site webcast recording, teen reader and Sky News interviews, I managed to scrape in a little heart-to-heart chat with Blackman about the theme of mothers in her novel, Knife Edge (second in the Noughts and Crosses sequence).


Having read some of her novels, having listened to her speeches, having seen her interactions with people, and having spent a privileged half an hour in her company, I think Malorie Blackman is going to be a hardworking, inspirational and outspoken Laureate. I think this may be her striding edge.


It was also great to meet the team that supports Blackmans’ novels: her publishers at Random House Children's Publishers – publicist Harriet Venn, editor Natalie Doherty, publisher Annie Eaton and MD Philippa Dickinson as well as Malorie's literary agent, Hilary Delamere (who is also a trustee for the Siobhan Dowd Trust).
Harriet spoke about her love for the Noughts & Crosses series (as well as Harry Potter) and what the Laureateship might do for an author as an entity as distinct from their books. Natalie spoke about enjoying working with Malorie on the short story Callum as well as Noble Conflict, and about how Malorie is an author who is happy to work with an editor’s suggested changes as well as stick with some ideas of her own. A beaming (and tall!) Philippa arranged an interview for Little M, with author Anne Fine. I met Hilary prior to the announcement (not knowing who she was) and she tried to put us onto other scents when Little M and I put Malorie’s frame into the picture as a possible Laureate. Dark horse!


Coming up on the blog, you can look forward to Little M’s interviews with Malorie Blackman, previous Children’s Laureate Anne Fine plus some chats with a host of other authors and guests who were present. This may get bookishly monstrous.....