We sat down for a chat...with William Sutcliffe


On the one hand, The Wall is an action-packed coming-of-age teenage adventure and on the otherhand it is possibly the most resolutely political of all the novels on this year's Carnegie shortlist. A modern fable, it tells an important and thought-provoking tale with interest and with grace. Its author, William Sutcliffe, tells us about the background to The Wall. 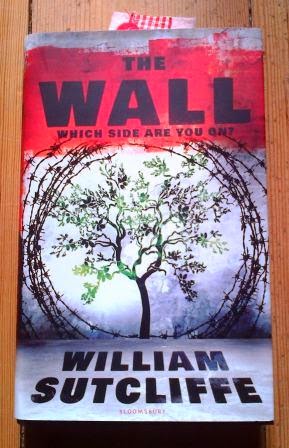 WSD: The Wall offers a very honest and painful consideration of what 'doing the right thing' means. What inspired you to write this modern fable?


Will Sutcliffe: The Wall in the West Bank has troubled me for a long time, and for years I have been searching for a way to write about it. Then it struck me that one of the common tropes of children’s literature is the character who escapes from his or her mundane, ordinary world through some kind of portal into a parallel, fantastical universe. I began to think that religious fundamentalists, such as the religious nationalist settlers in the West Bank, raise their children with utterly fantastical beliefs. In telling the story of a settler child who crosses from one side of the wall to the other, I realised that I could turn this idea upside down, with a narrative about a child raised in a world of fantasy who discovers a portal to reality.


The goal from the start was to write a book, like Animal Farm, that would work for younger readers as a metaphorical narrative set in a fictional universe, but for adult readers as political fiction about a real situation. The other thing I hope that it has in common with the Orwell novel is that even if you read it without any concept of the real place that has inspired the story, it remains a moral narrative about how your sense of right and wrong can come under extreme pressure when you find yourself in an unjust society.
(WSD: Yes, I think it easily achieves both of these ambitions)


WSD: Could you say a little about your research on/in the West Bank for this novel (and perhaps why you've selected Playgrounds for Palestine to receive 15% of your royalties)?


William Sutcliffe: I took two separate research trips. The first one was as part of the Palestine Literary Festival, visiting all the main Palestinian towns in the West Bank and participating in events, talks and seminars with local writers. I later took a second trip, in which I stayed with three settler families in different settlements in the West Bank. The two itineraries overlapped but never intersected due to tunnels and segregated roads. The geography of the West Bank is like nowhere else. These trips weren’t particularly extended, but they were intense, and I had excellent guides with me who taught me an enormous amount.


Both trips were deeply troubling in very different ways, and taught me an enormous amount that I could never have learned from home-based research. However much you have read on the subject, seeing what a 46-year-long military occupation looks like is shocking and depressing.


I have moved a few things around through time and place, but I have gone out of my way to make the physical setting entirely accurate. The book may read like a fantasy dystopia, but in many ways, it is reportage.


After visiting the West Bank, I knew I had to give some of my royalties back to the place that inspired the book. I would have felt deeply uncomfortable if anyone had been able to accuse me of profiting from the suffering of others. Since the political reality at the heart of the book is to do with the theft of land, Playgrounds for Palestine seemed like the perfect charity to support. They build playgrounds in the West Bank, Gaza and in Palestinian refugee camps – so what they are essentially doing is providing the gift of space to children. This felt like a perfect counterbalance to a story about and for young people, about the theft of space.

WSD: While Joshua's story is probably unusual, the battle he experiences with his family is much more familiar territory for many teenagers. Would the story have changed significantly if his parents had behaved differently?


William Sutcliffe: The situation that Joshua faces is extreme and unusual, though I think it reflects something at the heart of all teenage experience. It is in our teenage years that we come to realise that we have to define ourselves as individuals, not just as part of a family unit. This involves thinking for yourself about your parents’ beliefs and maybe deciding that you have different beliefs – possibly about some deeply important issues. This, I think, is why the teenage years are so intense. Joshua’s realisation that his developing moral ideas are at odds with those of his parents is something that I hope young readers will find easy to identify with – although hopefully they won’t experience anything quite so terrifying!
******
You can read M's review of  The Wall  here.