The Wall by William Sutcliffe
Review by M

The Wall has been nominated and longlisted for the Carnegie medal 2014. 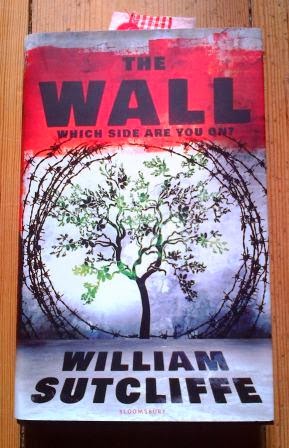 The Wall is a compelling story about a young teenage boy who follows his curiosity, stumbles into something he can’t control and then tries to do ‘the right thing’, which heartbreakingly sets in motion a train of events that go catastrophically wrong.


Based on experiences of Israeli settlements of the occupied West Bank and written as a modern fable, The Wall is clearly intended to be a profound and important novel. Exploring the good and the ugly of moral decision making, it is one of those ought-to-read novels with a heartbreakingly poignant story and an overall call to action.


But, for all of its heavy and heartfelt subject matter, ironically this novel has a quiet and gentle tone.  The writing is often descriptive and the pace is often quite slow even though it is punctuated by a variety of chases and action. I occasionally found myself skipping bits because I wanted to know what happened. Saying that, the prose is eloquent so if you choose to linger, you’ll be in a good place. For me, Joshua's family problems and small romantic developments weakened the plot and distracted from the story.
There is violence in the novel but it is not graphic and would be suitable for younger readers. The back of the book recommends further reading for readers who are interested in discovering more about the conflicts between Israel and Palestine.