Hostage Three has been nominated and longlisted for the Carnegie 2014 medal. 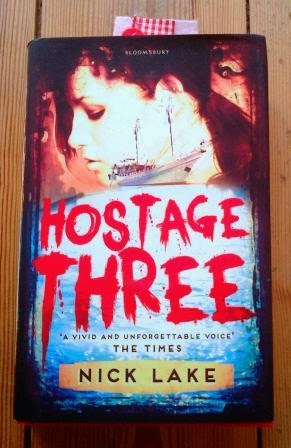 Pirate or banker? Can you tell the difference?


The opening scene is of a teenage girl, Hostage Three, who is being held hostage by pirates at gunpoint. I thought the novel would just be a bloody crime thriller for young adults (which is fine if you like that sort of thing), but it isn’t. It’s a thrilling and thought-provoking read that takes the reader right into the mucky heart of contemporary global economics and the psychologies of unequal relationships.


Like In Darkness, the chapters alternate to tell the stories of two characters whose lives are interwoven. The relationship between rich hostage Amy and poor Somali pirate Farouz provides the pivotal tension for the novel’s plot and its themes. But, unlike In Darkness, the whole novel is told from just one character’s perspective - Amy. This singular perspective probably broadens the novel’s appeal and accessibility but it also loses the distinct voices that carry In Darkness.


The novel’s last section, which is really an extended ending, was a disappointment. While I’m a fan of this sort of meta-fiction (playing with your audience and highlighting the ‘craft of fiction’) it didn’t really work for me and the story left me in disbelief. But for teen readers who haven’t come across this sort of thing in fiction, it will be a talking point.


I’d recommend this novel as a quick, thrilling and thought-provoking read and it exceeded my initial expectations tremendously. It reminded me considerably of Ann Patchett’s adult novel, Bel Canto. While Hostage Three doesn’t have the literary punch of In Darkness, Nick Lake has firmly cemented himself as a YA author who grapples successfully with big and controversially complex international (and psychological) issues. I am likely to buy his books without hesitation.