Charm and Strange by Stephanie Kuehn
This novel has been nominated for the CILIP Carnegie 2014 medal. 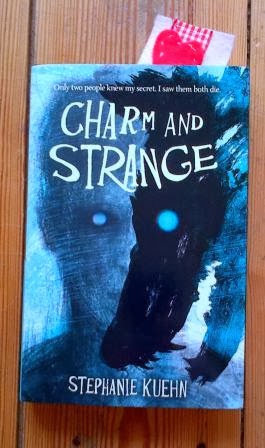 Charm and Strange: a curious UK hardback cover and a delightful title loaded with flavourful promise. I didn’t read the blurb too closely so I only had a vague idea of what this was going to be about and I’m pleased about that. If you look closely at the cover, you might spot a moon and a tennis ball. They are relevant and maybe significant. This novel is both charm and strange, and I kind of liked it.


Charm and strange. They’re flavours of quark. Those itsy bitsy quantum pieces from which we’re made. There’s plenty of fun and games to have with that but there’s also a dark and menacing implication if you think about entanglements and decay. This novel does exactly all that. It’s not a nice story and there’s very little fun in the actual plot. But, there’s a developed tension and the reader is unwittingly invited to unravel a mystery. That’s the fun bit. Gamewise, there’s a strong sporting element to the novel’s main character.


Win is at an elite boarding school. He is an athletic but anti-social teenage boy, with few (if any) friends. Drew is a rich tennis champion child with a mean streak. They’re really the same person and the novel shifts from Win’s present (matter) to Drew’s past (anti-matter). Is one of them strange? Is the other one charm? Or are they both? And what is eating away inside of them? Why has Drew become Win?


Charm and Strange sets a very dark and menacing tone. Drew is not the sweetest kid you’ll ever meet and what he does is very violent. Often, I’ve left a novel because the character is just too horrible for me. But this novel and its main character are also shrouded in mystery. You know that there’s even more to it (and him) than just that. Put a few of the pieces together and you’re going, “no, not that”, and “please, not that either”. From a fictional perspective, I was pleased that the mystery was not a plot cop-out.


Thematically, Charm and Strange is a big toughie: suicide, violence, mental health, self-harming, bullying, abuse and death. However, the tone of the novel is not gritty and there are plenty of gaps for the reader to fill themselves. Importantly for me, and without giving anything away, the final outlook is not bleak. If you’re ready to handle the darkest of some of these themes, Charm and Strange is an entrancing, thoughtful and (dare I say it!) enjoyable read.


A couple of drawbacks for me, if we’re thinking Carnegie criteria: a slightly overcrowded plot and I can’t decide if it all needed to be there or not (especially Anna). Sometimes Drew/Win’s voice didn’t sound like I expected him to sound – but that might be me (or his very posh American private school).