All the Truth That's in Me - Julie Berry

All the Truth That’s in Me had me from the first page. I loved it very much. That has as much to do with the story as it does with the writing. 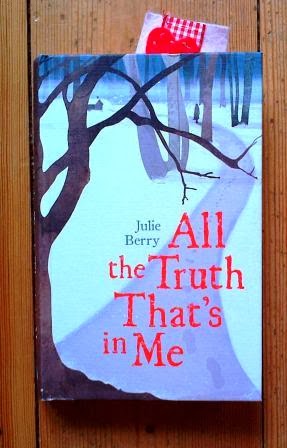 Judith went missing when she was a young teenager. She returns a few years later, mute, to her community in Roswell Station. Nobody knows where she has been or why and she can’t tell them. Set back when the United States of America was still in its formative years and western ways of life were quite different from today’s, there is no loving welcome for her and she is treated with suspicion as a cursed outcast by her community. While this is bad enough, Judith has no time for wallowing in self pity and is treacherously defiant about the loss of the love of her whole life.  All the Truth That’s in Me reads like a eulogising ode: To Lucas, from Judith.


At face value, this is an unrequited love story, smouldering and intense. It’s mournful and yearning, in the way of odes, elegies and praise poetry. But, through its praising and its questioning, Judith’s narrative is also suspenseful and the whole story turns on a couple of whodunit questions.
A girl has been murdered and Homelander invaders threaten. Rumours taken as truth for answers abound.  As the story progresses, many readers will fill in the story’s gaps correctly. For me, these came as light relief from what was otherwise a very intense and absorbing read.


The overwhelming feeling that this novel is a poetic ode or eulogy, to Lucas, is further enhanced by this ‘verselike-diary entry’ structure. Again, this also gives it the quality of a testament, which narratively it is, in more ways than one.  The chapter structure feels like verses from the Bible and is thematically very fitting as Judith’s community is deeply and often rigidly religious. With references to Greek myths, I also can’t stop thinking of Keat’s Ode on a Grecian Urn. I love it when a novel sends me off on a search.


This is a little book but it is quite as long as it should be. I dare any of you not to fall head over heels for Lucas (and that’s something I may never have said on this blog before!?). Judith’s ode does its work and I loved it. It was enormously satisfying. Far and away, All the Truth That’s in Me has been one of the most captivating books I’ve read all year.


This novel has adult themes suited to the ages of its characters who, at times, are about eighteen and twenty-something. But, these issues are treated in a way that makes this novel easily suitable for secondary school shadowing groups. Visions of things that might not have happened in the story may fill the mind of the reader in much the same way that they did the judging minds of Roswell Station’s community.


This novel may also prompt some readers to find out more about Joan of Arc.