A Month With April-May - joint review

A Month with April May by Edyth Bulbring
This is a joint review with separate thoughts from M and Little M.


M’s thoughts
April-May February is a Twilight addict and fancies herself as Bella – even though her skin will always be a couple of shades darker. Her parents have split up and she’s living with her dad who, in the current economic climate, works as a tow-away driver. She’s won a bursary and has just started at a posh new high school in Johannesburg. However....she just doesn’t connect with her new teacher, Mrs Ho. Of course, April-May is also a rebel and gets up to all sorts of ‘scrapes’ which she has designed - but she’d say this was due to “circumstances”. She’s the very clever practical joker, only she’s not joking.  A Month With April-May is about April-May desperately trying to get her life back into the order that she wants.


The novel starts off really well – and is quite addictive. Although it keeps up the pace (with April-May’s witty wisecracks, how could it not?) it quickly becomes a situation comedy. One that many young teen readers will probably find very funny. 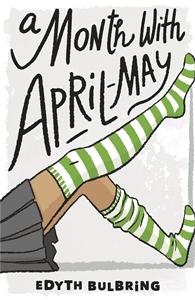 A Month With April-May is written for young teens but I really wanted to read it because I enjoy a lot of South African adult fiction that has children or teens as its main characters. I’m thinking of adult novels like Barbara Trapido's Frankie & Stankie, Lauren Liebenberg's The Voluptuous Delights of Peanut Butter and Jam, and Rachel Zadok's Gem Squash Tokoloshe. These are the books that sprang to mind when the publishers said that April-May had a “special charm”.


Yes, the character April-May February has a special charm as does the novel. The first chapter or so (for some reason) is reminiscent of recent Barbara Trapido. But, unlike the aforementioned adult novels which are retrospective stories, April-May takes a post-apartheid contemporary view of life in Gauteng's eastern suburbs from a mixed-race teen's perspective (with a dash of authorial presence sniping at current socio-economics and the high traffic incident casualties). I think it does it well. What is refreshing, is that race wasn't obviously relevant to this story and only casually pops up when that all-important activity of Johannesburg poolside tanning takes place.


A Month With April-May made me smile and I loved April-May's cold facts which she includes at the end of each chapter. The novels themes include typical school based ones as well as the changing structures of contemporary family units. I thought the last line of the novel was very meaningful and pulled the novel together well. Also, April-May should be applauded for reminding people that it does rain in Cape Town in winter.


This is a quick and light read with a very distinct South African flavour. There’s a glossary at the back – which might be useful for some readers in explaining some of the South African slang used in the novel.  Probably best suited to readers 11+ (plus older South Africans living abroad).

Little M’s thoughts
A Month With April-May didn’t really hook me. I am probably not used to how it’s written. I  got a bit confused and sometimes I didn't understand what April-May was talking about. It also jumped around a bit. I’m not used to books where it’s just about a person rather than an adventure. I haven’t  read any Louise Rennison books (the publishers compare April-May to books in Rennison’s style) but I like books by Judy Blume.

A Month With April May was originally published by Penguin South Africa under the title Melly, Mrs Ho and Me. Melly and Mrs Ho are key characters in the novel.
Posted by M at 12:00:00 am