Sunday was Remembrance Day so  we thought now was a good time to share a list of children's/YA novels about war and conflicts. This is one of Little M's favourite genres too.

We have read some of these books and if we've read them recently, there is a link to our review. We've also included a list of books that we haven't read but that have been recommended to us.
Please feel free to include any other books that have war or conflict as a theme in the comments section. 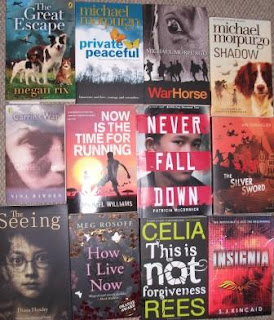 
Now Is the Time For Running – Michael Williams (review)


A World Between Us – Lydia Syson (review)


This Is Not Forgiveness – Celia Rees (review)

Other Recommendations
We have not read these books. They have been recommended by various people.


Blitzcat – Robert Westall (about a cat)


Once, Then , Now, After – Morris Gleitzmann quartet (We’ve read Once. It's brilliant!)


I Am David – Anne Holm (escapee from a communist camp)


Out of Shadows – Jason Wallace


The Wheel of Surya – Jamila Gavin


How I Live Now – Meg Rosoff


There are more suggestions from Alex Baugh (The Children's War blogger) on her Remembrance Day guest post for us.


Have you read any of these books?
Can you recommend any other books with war and conflict as a theme?