Alex Baugh runs The Children's War blog which holds an extensive collection of books about children and teenagers and Word War II. We're delighted that Alex has joined us (all the way from New York) for a special Remembrance Day guest post.
******
“Any nation that does not honor its heroes will not long endure”
- Abraham Lincoln


In 1918, on the 11th day of the 11th month at the 11th hour, the Armistice ending World War I, the war to end all wars, was signed between the Allies and Germany. The date became a nation holiday called Armistice Day, set aside so that nations to remember and honor those who lost their lives on the battlefields and in the trenches.


Sadly, World War I wasn’t the war to end all wars and twenty-one years later, the world was at it again. Six years later, World War II finally ended. In the United States, Armistice Day was changed to Veterans Day, a day to honor all veterans of the armed services, the fallen as well as those who are still living, and those who are still serving. In the British Commonwealth nations, Armistice Day was changed to Remembrance Day, a day honor those who fell in battle in all wars.


Here are some of my favorite books for helping young people understand the meaning and importance of Veterans’ Day and Remembrance Day:

The Unknown Soldier by Linda Granfield


The Poppy Lady: Moina Belle Michael and Her Tribute to Veterans by Barbara Elizabeth Walsh, illustrated by Layne Johnson

And here are some of my favorite stories about the men, women and even animal soldiers: 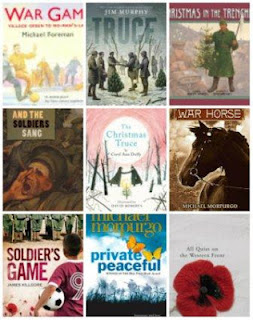 
Truce: the Day the Soldiers Stopped Fighting by Jim Murphy


Christmas in the Trenches by John McCutcheon


And the Soldiers Sang by J. Patrick Lewis


All Quiet on the Western Front by Erich Maria Remarque 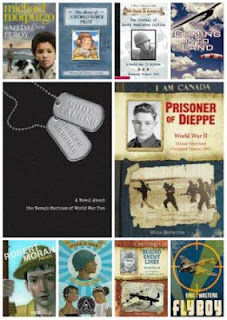 A Medal for Leroy by Michael Morpurgo


The Diary of a World War II Pilot by Dennis Hamley


Coming in to Land by Dennis Hamley


Code Talker: A Novel about the Navajo Marines of World War Two by Joseph Bruchas