One of Little M's favourite authors - on our blog!!!
Rushing to finish two books (yes, the next Laura Marlin series and the sequel to The One Dollar Horse), we’re delighted that author Lauren St John managed to squeeze in some time for Little M before rushing off to a writing residency at a boarding school! 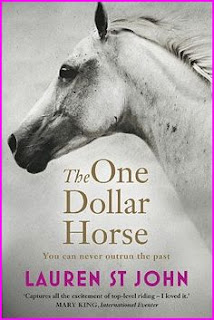 Little M: What was it like to grow up in Zimbabwe?


Lauren: It's one of the most beautiful countries in the world and it was incredible to grow up surrounded by nature, but I also grew up in a war so I spent quite a bit of my childhood knowing I could die at any time.


Little M: Did you ever have a white giraffe?


Lauren: I didn't have a white giraffe but I did have a pet giraffe called Jenny. When I was 11 we moved to a farm called Rainbow's End, which had a 100-acre private game reserve on it. We had impala, wildebeest, warthogs, monkeys, ostriches and Jenny. It's quite amazing to wake up in the morning and look out of the window and see a giraffe at the bottom of your garden.

Little M: Have you ever ridden a giraffe?


Lauren: I've never ridden a giraffe and I don't think anyone ever has. It's too far to fall!

Little M: Have you ever been on an investigation, like in the Laura Marlin stories?


Lauren: I've done a lot of investigations for The Sunday Times and I love it. It is sort of like being a detective. I did one on spies, which was great fun, and another into dolphin trafficking, which was quite scary because it involved the Russian and Ukrainian mafia.


Little M: Do/did you have a horse or do you just ride?


Lauren: We had eight horses when I was growing up, but now I just ride when I can. I'd love a horse.