Once again, Lydia Syson's teen fiction marries the thought-provoking nitty gritties of wartime with a tone that is celebratory in its joie de vivre. That Burning Summer is a quick and enjoyable read that complements her debut novel, A World Between Us. 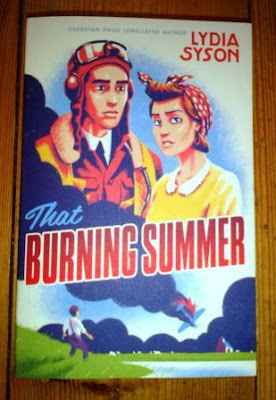 That Burning Summer shares some similarities with Syson’s first novel, A World Between Us: war, moral conflicts and courage, deceptions, first love and an underlying playful humour that adds a light touch to otherwise heavy subject matter. But there are significant differences too.


This time, the action is set on English home ground down in Romney Marsh, Kent in the summer of 1940, the year of the Battle of Britain. At this point, most of the children in that area of England have been evacuated but Peggy (16) and Ernest (11 nearly 12) have not. They’re living in and helping out on a farm with their mother and their aunt’s family. Their father is away...well, somewhere?


The novel is organised around the different rules and advice the government set out in a leaflet on what to do when Britain is invaded:
It is interesting to see how this propaganda leaflet affects the behaviour of the novel’s different characters, especially young Ernest who is most perturbed and alarmed by this document.


The novel is filled with tension as you wonder what individual characters will do when they’re faced with potential and life-threatening deceptions or revealing secrets. And where is the children’s father? Is Hendryk as innocent as he claims? What will happen in the end? Like a mystery thriller, the plot is interspersed with clues as to the answers.


For me, the most compelling narrative is Ernest’s story: his fixation with doing the right thing at his age is endearing. The heroine, Peggy, is a headstrong and wilful character. Ernest is too, but in his own much quieter and reflective way. June their cousin, is an interesting character and brings to mind the portrayal of Trixie in the Call the Midwife television series. And pilot Hendryk's story and dilemma is truly heartbreaking.


Two of my favourite scenes include a funny one (borderline farcical when something slowly appears round a corner) and a passionately truthful one (everything some of you already knew about dancing very closely!). The developing romance was my least favourite part of the story because I thought Peggy would have been more afraid and confused about what to do. But, I suppose especially in times of war, there's no accounting for what people might do....


Younger readers especially will likely appreciate Ernest’s confusions and actions, and enjoy the historical explanations that are woven through the novel. Older readers are likely to sympathise with Peggy. Syson also creates a really strong sense of place – I could see Romney Marsh in my mind even though I’ve never been there.
Although there is a thrilling romantic thread in this novel, rather than an historical war romance I would describe That Burning Summer as an historical war mystery/thriller which, in terms of interests and age, may appeal to a broader readership than A World Between Us.

Publication details: Hot Key Books, 3 October 2013, London, paperback
This copy: received for review from the publisher
Posted by M at 5:00:00 am