Such Wicked Intent: The Apprenticeship of Victor Frankenstein
by Kenneth Oppel
Book Review by Little M 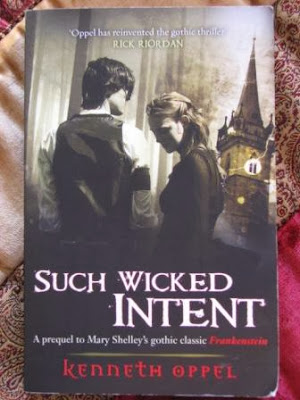 Oppel has written this novel with a sixteen-year old boy, Victor Frankenstein, as the main character and narrator. After the death of Konrad Frankenstein, Victor and the Frankenstein household suffer terribly. The novel shows how Victor grows an obsession for resurrecting his twin brother, Konrad, from the dead. Victor is madly in love with his headstrong, distant cousin, Elizabeth. However, Victor knows that Elizabeth and Konrad were together but he will not stop till he gets what he wants. Victor, Elizabeth and their best friend, Henry, search for ingredients to help Victor bring Konrad back from the dead. Though, what they find will change their perspectives on life altogether.


I really love Oppel's style of writing in these novels. It is very different to another book I have read by him, Half Brother. Both series/books are exceedingly different and I didn't realise they were written by the same author as the style of writing is very different and also the novels are in completely different genres. I think the Frankenstein prequels would be in the Gothic genre as Mary Shelley's Frankenstein was a Gothic novel but I also think it would be in the YA category. I think the Half Brother novel would come under contemporary fiction or realistic fiction. Half Brother I think is written for younger readers than the Frankenstein prequels however I have recommended Half Brother to M (who is my mum).
I have read three books by Kenneth Oppel and I have loved all of them. He is definitely one of my favourite authors. I would definitely recommend him to readers of H.M Castor because Oppel’s writing style reminds me a lot of VIII.


Publication Details: David Fickling Books, Oxford, 2012, hardback but this edition 2013, paperback
This copy: Received for review from the publisher