We haven't done a post like this for a very long time...... a little showcase of some review books we're looking forward to reading and some delightful looking suprises that we may not have time to read in the immediate future. And some things that might be more to other readers' tastes than ours.

I was thinking about before we had a blog and how we didn't actually know about many children or teen books that had been published - other than what you saw on the shelves in bookstores. And then I thought that these shelves change so quickly, how would you know that you'd missed a gem?! So, just in case any of these might become one of those gems....... 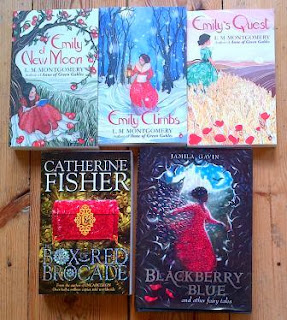 These finished copies look gorgeous!
Catherine Fisher's The Box of Red Brocade is the sequel to her Obsidian Mirror time-travel adventure fantasy that I really enjoyed last year. I expect this one will be good (or at least, will take the story further).
Blackberry Blue and other fairy tales by Jamila Gavin is published by Tamarind (November 2013) so I expect some fantastical diversity in these short tales. The cast, I'm told, is a multicultural one.
And then, a wonderful surprise and news from Virago that they're publishing children's classics under their Virago Modern Classics imprint. That makes my heart jump a little and it's an apple I'm keen to bite. I loved the Anne of Green Gables stories when I was a young girl so it's great to see LM Montgomery's Emily trilogy on the new list (November 2013). I haven't read them before so it's all new. Three for our Classics Club Challenge lists perhaps: Emily of New Moon, Emily Climbs and Emily's Quest.

﻿
Because we don't have the time to review that many books, we love it when publishers send us the book we're really looking forward to very early because then we can take our time to enjoy reading them.
More fairy tales, Tinder by Sally Gardner is inspired by Hans Christian Andersen's The Tinderbox. Although I loved them as a child, as an adult reader I'm not really one for them anymore but everything I've read from Sally Gardner has been surprising and unexpected. So that's what I'm expecting. Forthcoming from Indigo in November 2013.
Much to Little M's delight, the second book in the Oksa Pollock series, Oksa Pollock: The Forest of Lost Souls has landed. She knows that these books are aimed at readers just slightly younger than her, but she loves Oksa! That's out in English translation from Pushkin Children's in February 2014.
We're also both looking forward to Rosie Rowell's Leopold Blue (a coming-of-age story set in rural 1990s South Africa!) and Tom Easton's Boys Don't Knit (a comedy about a teenage boy who is sort of forced to choose knitting). Both are forthcoming from Hot Key in January 2014.
The Invention of Wings by Sue Monk Kidd is a fiction inspired by Sarah Grimke, a female abolitionist in nineteenth century USA. I'm hoping that this one will be a single sitting type read. It is out from Tinder Press in January 2014. The Tinder Press list is always on my radar because they've had some really good ones (Snapper and Amity & Sorrow instantly come to mind). And with that one came a copy of Monk Kidd's The Secret Life of Bees! Both adult fiction though I've seen Bees recommended as a crossover so...
Some quirky non-fiction for the Whovians: Who Goes There by Nick Griffiths has been updated with a new chapter to celebrate 50 years of Doctor Who. The book is a kind of travel guide around the Doctor Who film locations. Published by Legend at the end of this month.
Ostrich by Matt Greene, is a an adult fiction coming-of-age styled comedy. I'm getting into fiction that makes me laugh lately (and I know that's tricky because apparently I have a weird sense of humour!). Coverwise, I think we've had enough of the John Green bandwagon though.... (already published; Weidenfeld & Nicolson)
Candy Gourlay's Shine is out from David Fickling Books. I'm a fan of many Fickling novels and Candy Gourlay is an intriguing middle grade author. A lovely surprise to receive and it's on the review pile - hopefully one of us will find some time for it!
Thanks to all the publishers who have sent these books to us.

Email ThisBlogThis!Share to TwitterShare to FacebookShare to Pinterest
Labels: publishers