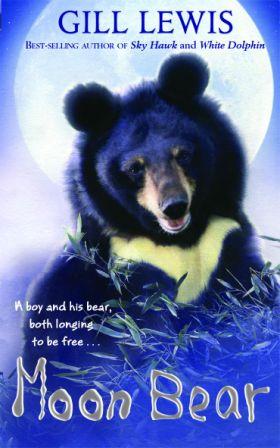 Moon Bear is set in a city in a bear farm. 12 year old Tam is forced to go and work in the city due to family problems. He is sent to a bile bear farm which collects bile from bears and sells it off as medicine. The bears are kept in small cages and they are not allowed out of them. When a logging truck pulls up one day with a cub bear who is sick, Tam sets about nursing it back to health no matter what it takes. He promises to return him to the wild.


I loved this book and I think it is Gill Lewis's best novel so far. It is full of love and passion and I loved how one boy takes on the role of nursing a bear back to health and promising to set it free. I couldn't put it down.


All the characters are very believable and my favourite character is Tam. He is my favourite because he had the courage to stand up for himself and also because he would not let anything happen to the cub. There a many sub plots in the story like with the girl who is ill and is using the bear bile to try and get better.  The style of writing is not too hard but not too easy. It is a book that you will want to read again and again. The novel is not too long but it isn't too short; it is just right.


It took me a while to figure out where it is set. It mentions Laos. I think that is in Vietnam and it also mentions China so I figured it was somewhere near China and Vietnam. In some books they put maps at the front. They could do that with this one or say where it is set.


Moon Bear may make you cry and laugh a bit. Well, it made me do that. I think anyone would love this book if they are a fan of Michael Morpurgo, Gill Lewis or even just an animal lover.   Altogether this book was fantastic, I hope Gill Lewis writes some more!

You can read my reviews of Gill Lewis other books: Sky Hawk and White Dolphin
Posted by M at 10:03:00 am