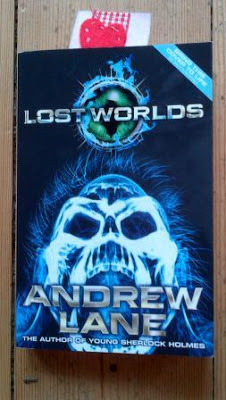 Calum Challenger was in a car crash which killed his parents and paralysed his legs. He is about sixteen and lives alone in a flat with a great amount of inheritance money. Calum never goes out and the one thing he hates most  is a wheelchair. He hates the name, the chair itself; he hates anything to do with it. When Gecko, a teenage boy crashes through one of Calum’s skylights, they immediately become friends. College student, Tara, is hacking into Calum’s website about animals that aren’t discovered. He sends Gecko to find her. In his high-tech apartment Calum directs a team on a journey into dangerous lands to get some DNA for him to try and cure his paralysed legs.


Lost Worlds was a brilliant, superb, action adventure novel. I definitely recommend this novel to action-adventure readers. It is fast paced so you never get bored.


My favourite character is Gecko. Gecko is the cool boy who free-runs. Free running is where you run across roofs/buildings without anything to catch you if you fall. He also comes up with awesome ideas and he can think on his feet!


The style of writing is not too difficult but also not too easy. It’s a nice style. One that makes you want to read on! When the second novel comes out I so want to read it!


Lost Worlds made me think about animals or beings that may not have been discovered. It really does make you think.


Andrew Lane is also the author of Young Sherlock Holmes.