Blame My Brain: The Amazing Teenage Brain Revealed is a popular science book written specifically for teenagers and this edition has been updated to include new scientific developments. However, the author, Nicola Morgan, is not a scientist and this is perhaps both the book’s main strength and its weakness. If you’re the curious sort, who’d like a bit of a laugh and an easy introduction to a very big subject, this is not a bad place to start. 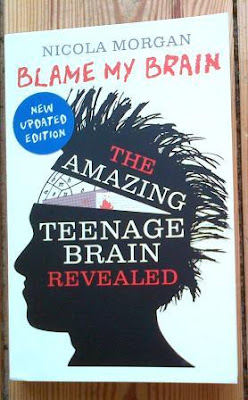 As a parent, one of the things that often makes me laugh is when people say ‘I sound like my mother’ or ‘I’m turning into my parents’. That downcast utterance usually follows a spate of exasperated hand-gesturing about why our once very lovely teenagers are now the untidiest, rudest, deafest people we’ve met in a long time (of course, Little M is perfect). Blame My Brain attempts to cast some light (and a lot of thought) on how the growing teenage brain affects this behaviour.


The book puts the science into easy to read, follow and understand language. It’s quite chatty and funny – a bit like a popular magazine. Each chapter presents an everyday scenario highlighting a particular kind of teen behaviour – e.g untidiness, sleeping late, taking risks, studying, sticking with the girls or boys, drinking alcohol, smoking. Morgan then attempts to explain this behaviour by discussing what science thinks is going on in the brain. At the end of each chapter, she presents a number of alternate (and sometimes conflicting) theories from different areas of science. There is also usually some kind of test-yourself quiz so you can find out how good you are at reading people’s faces or how you understand risk.


By including the different theories and the soft quizzes, I think Morgan reminds readers that knowledge is created by us – humans - and it changes. Individual scientists and disciplines can differ in both their approach which affects their findings and explanations. She also attempts to show that what science often presents is a specific kind of average and that there isn’t just one type or explanation for behaviour. She shows how everyday people can use this science to draw their own conclusions by offering up her own opinion which often draws in her everyday observations or experiences.


Morgan goes to great lengths to emphasise that individual teenagers do behave very differently – and in one chapter about dopamine she emphasises that statistics show that the majority of teenagers do not drink alcohol excessively or have underage sex. She also reminds us that adults can display some of the behaviour that is frequently attributed to teenagers. Similarly, in the chapter on sex differences, she emphasises that there are spectrums (although I don’t think she does this strongly enough and this was my least favourite chapter – I’d be interested to see what teens thinks themselves).


Sometimes, I was unclear about which bits were Morgan’s interpretations and what came direct from research. Even though there are endnotes for the research that she has included, I would have liked more detailed citations. What she also omits to do is to make it clear that in popularising and condensing the science, she is eliminating a lot of detail that makes a big difference in how we should understand and interpret science. I sometimes felt like the science faded into the background.


Overall, this book provides an introduction to the topic of being a teenager, brains, behaviour, causality and science methodologies. One of the book’s strengths is that it encourages and shows you how to care and develop your own brain. While providing some explanations for brains and behaviour, what I think it could also do is get readers asking questions.

Publication details: Walker, May 2013 (updated edition), London, paperback
This copy: received for review from the publisher