Heathcliff and Cathy. I’ve known them forever – at least I thought I did! Honestly, I’m not sure if I’d ever read all of Wuthering Heights before. I know I’d started it – at least once and given up on it. Now, I’ve done it and can add it to my Classics Club reading list. I am pleased that I read it.


Quite simply, Wuthering Heights is about a relationship, begun in childhood, between Heathcliff and Catherine. When this relationship becomes forbidden, Heathcliff, who has been poorly treated, develops an obsessive plan of revenge.


However, the novel is not quite that simple. For example, I didn’t previously realise that the novel has two parts and that there is more than one Heathcliff and more than one Cathy! The novel is also about the relationship between two neighbouring families, the Earnshaws and the Lintons (depending on how you view him that will include Heathcliff; otherwise Heathcliff is a third). 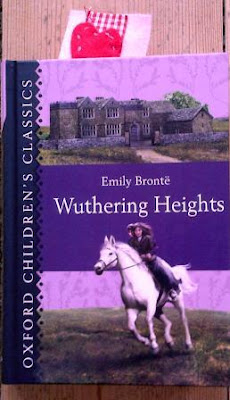 Published in 1847, it is set between around 1770 and 1801 in the Yorkshire moors. As with so many of the older classics, it takes me a while to slip into the language probably because I don’t read them enough for the language usage to become familiar (so my brain has to work a little bit harder to read them). Some of the characters also speak in old Yorkshire dialect (not too frequently!) and some of that I just had to skip because it was like another language and I was too lazy to try and figure it out (although be warned, some of it contains important details and you may occasionally find the need to backtrack).


I was also very busy trying to follow who was narrating the story. It starts off being narrated by Lockwood who is the new tenant of Thrushcross Grange. But then Nelly takes over and tells Lockwood the story of Catherine and Heathcliff who lived in a nearby house called Wuthering Heights. At times, it switches back to Lockwood and then a couple of times it is someone else. It also didn’t help that a few characters shared the same names, used intermittently as forenames and surnames; or that Nelly changes her ways of addressing people! I got mixed up quite a few times about which Catherine, Linton, Earnshaw or Heathcliff was being talked about! A very incestuously intermingled story and narration.


For me, Wuthering Heights is a very dark novel with very little plot. It’s an example of a gothic novel: despairingly gloomy in every way and yes, with a hint of ghosts too. The novel has two main settings: the properties of Wuthering Heights and Thrushcross Grange. Occasionally, it moves onto the moors but hardly ever and usually only to go between the two houses. The pace is also very slow. Plotwise, it improved towards the end although it constantly exasperated me and the actual ending seemed rushed and out of place.


I didn’t like any of the characters really. I definitely wasn’t drawn to Heathcliff. Although he is treated appallingly, his behaviour in turn is shocking. I found Cathy annoying (more so the first than the second; perhaps Nelly’s narration may have had something to do with that – the first Cathy was not her favourite). Lockwood as a character is alright but his main role seems to be as a framing device for telling the story. Nelly as a character might be quite pleasant although I have questions over how reliable she is – there were clues that she was deliberately painting a dark picture of Cathy; of course, we could say that Lockwood may have been less reliable and upstanding than he suggests).


It's hotly debated but many people refer to Wuthering Heights as a passionate romance.
I’m in the camp asserting that it is not a romance.  I’m not even sure I’d say it was passionate – obsessive, yes. Is that gothic style romance?!


This copy was gladly received for review from Oxford University Press - thank you. It’s a hardback edition in their Children’s Classics range. It has a pretty cover (although on seeing it, Little M thought that Heathcliff might actually be a horse!) and the novel’s text is in a big, clear, easy-to-read font. It’s definitely an accessible edition for a children's classic and there’s a little bit of extra information at the back (but only a little).


Is Wuthering Heights a children’s classic? Well, there’s nothing to mark it as one but there's also no reason children should not read it and including it in a children's classic list certainly opens up literature for them. They might well enjoy the ghastliness of the characters! For many, I suspect, the language will be a challenge.

Some small but SPOILERY thoughts and questions:


Why are dogs so badly treated in this novel?


Is Heathcliff a murderer? I’ve seen this question somewhere and it’s a good one. I think the answer is no but that yes is a distinct possibility (of the first Mr Earnshaw, not Catherine).


Was Earnshaw Heathcliff’s father? I suspect yes or that he was the son of a very close friend.


Was Heathcliff deranged, a product of his mistreatment, or just a really horrible person? I’d ask similar questions of Linton Heathcliff.
Was the first Catherine a bit silly?


Weren’t they all just suffering from a very long case of cabin fever?


Plotwise, there were a couple of surprises. For example, when Cathy has a baby. I didn’t even realise she was pregnant! Perhaps I’d skipped something along the way?


I did think there was a small chance that someone may have topped Heathcliff.