Here we join in with blogger memes like In My Mailbox (IMM) at The Story Siren  and the new British-based Letterbox Love to share the books that we recently bought, borrowed or received through the post. 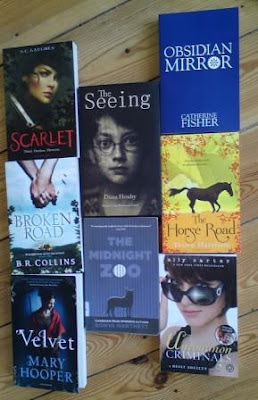 The Midnight Zoo by Sonya Hartnett.  This was on the Carnegie shortlist and recommended to us. I don't know much about the plot other than it's wartime and about two brothers.

For review (lots of historical and quite a few from Bloomsbury this week):

The Horse Road by Troon Harrison. Combining history and the horse; could tick lots of boxes for both of us.  It's set in 102BC in Central Asia during the Chinese invasion.  And it's intended to be an equestrain adventure with a 13 year old girl as the main character.  Looking forward to this. From Bloomsbury, this one's already been in store for months.

The Broken Road by BR Collins.  Yes, two books with 'road' in the title. Another historical teen novel from Bloomsbury, this one's about the Children's Crusades in 1212.

Scarlet by AC Gaughen. Will scarlet is a she and retells the story (romantically) of Robin Hood. You know me, always like a bit of gender mix-ups. It was published this month by Bloomsbury.

Velvet by Mary Hooper. A 16 year old laundress gets mixed up with a medium who speaks with the spirits. Something caught my eye on this one but I'm not sure what it is....This is being published by Bloomsbury in July.

And speaking of 'seeing', next up is The Seeing by Diana Hendry.  It's about a teen who has 'second sight' and can see 'leftover Nazis' and he and some friends decide to root them out.  It starts out as a game but ends up as something else. It is said to be thrilling and disturbing.  Little M says the cover makes her think of ghosts.  For me, it looks like Harry Potter. This is being published by Bodley Head in July.

Then we have thieves. Uncommon Criminals by Ally Carter is the second in the Heist Society series from Orchard.  We haven't read the first book but the central character is Kat, a high class art thief. This one involves a Cleopatra gem and curses.  Reminds me a bit of Nancy Drew and the BBC's Hustle.

And coming out in October from Hodder, we have a proof copy of Obsidian Mirror by Catherine Fisher, author of Incarceron. This one includes finding a killer, stange truths and visiting and changing the past.  Looking forward to this one.

Email ThisBlogThis!Share to TwitterShare to FacebookShare to Pinterest
Labels: in my mailbox, letterbox love