The Humans by Matt Haig
Reviewed by M


There’s really nothing like being alien that gets you thinking about home and who you are. 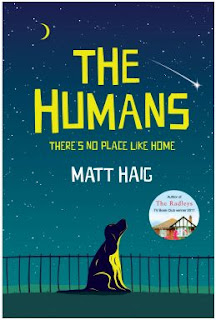 Forty-three year old Mathematics professor, Andrew Martin, has made a world changing mathematical discovery. This results in his swift abduction by outergalactic alien hosts. Believing humans to be inherently and undeniably violent and greedy, an alien from Vonnadoria is sent to earth as Martin’s physical replacement, his main task being to wipe out any proof or knowledge of the discovery. Narrated by the alien, The Humans is his evidential report about what it is to be human.


The Humans is a compelling and relatively light read that makes you smile more than anything else. Without giving much away and while there is death and destruction, this is a feelgood novel (at least, it was for me but depending on where your headspace is currently situated, you might feel differently).


From the first page, this is a funny book that you know is going to include a fair amount of wryly observed human navel-gazing. My gut (rather than mathematical) instinct sees The Humans as a tenderised cross between The Hitchhiker’s Guide to the Galaxy, a David Lodge novel and Baz Luhrmann’s song Everybody’s Free to Wear Sunscreen. Little M thought the premise sounded like the film, Meet Dave. If you like any of those, you’ll probably enjoy The Humans.


The main niggle I have is that I didn’t really connect with any of the characters – I’m not sure if this is the point (emotion-free narrator) or if it’s linked to Haig’s style/the novel’s voice. The other thing that might have affected this is that I read this novel on an e-reader (I know, gasp! More about that below).


I’d highly recommend it. Suitable for any reader who can handle the f word and light sexual references.


These two videos both say a lot about The Humans:
The Humans Book trailer featuring Advice For a Human:

About the e-reading:
I’ve never read anything on an e-reader. I’ve read plenty of non-fiction onscreen, but never fiction. So this was a first. Quite fitting that it was The Humans that smacked the champagne over this virgin voyage! My experience of reading The Humans was not too dissimilar from the Vonnadorian visitor’s experience on earth. I had to relearn how to turn a page. Plenty of mishaps. And I lost my page. Had to flick back to the beginning because my memory of the first event has been mysteriously wiped. Only, this wasn’t paper so it didn’t flick. But, I finished it and I even cried (slightly) once.


HUGE SPOILER & THOUGHTS
·        A flow of advice for being human is dispensed throughout. I think live in the present because it’s fleeting  and essential was a strong thread in the novel.
·        Rather than a number (prime or anything else) the alien narrator concludes that love is the basis of being human.

Publication details: 9 May 2013, Canongate, Edinburgh, hardback
This copy: digital proof received from the publisher for review
Posted by M at 12:00:00 am