Monkey Wars was a refreshing read, quite different to many other novels that I’ve read recently. 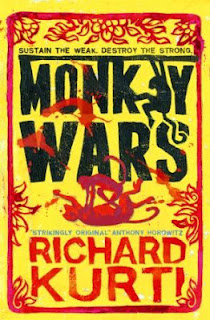 At first glance, it is a story about monkey troops in Kolkata, India. When humans feel threatened by the mischievous Rhesus monkeys, they bring in the Langur monkeys to get rid of them. Or so the story goes....From here on, it becomes a territorial war between monkey troops. The story focuses on Mico, a young Langur monkey who is small and thinks a lot about what he sees and thinks is going on. And at some point, he has to decide which side he is on – and there are many sides.


At second glance, Monkey Wars is a fable and explores many questions about power, politics and moral decision-making. But it’s also an urban war story packed full of action, gore, military strategy, loyalties and loves, spying and insurgency.


Being a fable, monkeys and their behavioural characteristics (and ways of marking territory!) are part of the plot but they are also humanised for the sake of storytelling. At times, you recognise it’s a monkey (e.g. defecating to mark territory) but at other times, I easily imagined it was human characters. It took me a couple of chapters to get used to this idea but after that I was really into the story and it was quite page-turning. Don’t be surprised if you find yourself rooting for any particular monkey! Mico was one of my favourites, but also Papina and Hister.


Initially, the timescale of the novel seems to be a matter of days but then I realised that it became months and then most definitely years – at least a lot of monkey years (what’s that in human years?). In this sense, it’s a long story told over much of a lifetime.


The novel is divided into three parts. Part two was my favourite. The ending, for me, was slightly disappointing because it came together a bit too easily. However, it brought most threads together – and there were quite a few. The ending definitely leaves with you with a lot to think about where and how the characters who survive might end up. It might make you think about wars and situations that you know about in real life too.


Monkey Wars re-inspired me.  As much as it is a story about power, politics and war, it is also a story about how we create and use history – or rather, histories. How much of our history do we really know? Which parts have we not been told? Which parts have been colourfully embroidered or dulled? And of course, who did the telling? In Monkey Wars, the narrator is omniscient (third-person and all-knowing). I wonder if this was to give us the sense that the whole truth was being told and not just the truth from Mico or Papina or Tyrell’s point of view (author Richard Kurti tells me his reasons tomorrow)? And of course, was there anything important that the narrator may have left out?


Issues touched upon in the novel include power, politics, tyranny, strategy, genocide, war and refugees. I particularly liked the refugees aspect. I would highly recommend this novel to teens. It would likely appeal to anyone who wants to read about war, action, history, and/or ideas. And maybe monkeys. It is recommended for readers aged 11+ but I would say that younger, confident and mature readers would enjoy this novel too (note, there are some graphically violent scenes).


Monkey Wars made me (as an adult) think about:


Publication details: 2 May 2013, Walker, London, paperback
This copy: uncorrected proof received for review from the publisher