Oksa Pollock: The Last Hope is a fantastic novel. You would never guess that it was translated from French. Yes, I know that may seem strange because why would anyone want to translate a French novel when you have millions of other books already in English? But, it's definitely worth it. 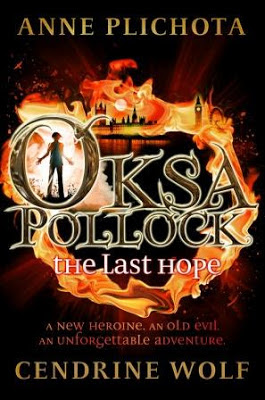 The novel is about the Pollock family and their daughter, Oksa, who finds out her family come from somewhere that's not on maps or known by ordinary people. She realises that she can fly, move objects without touching them and produce fireballs from her hands, which is not what teenagers normally do! Oksa's gran creates weird ointments and remedies and her math's teacher is not quite what she thinks he is. Whilst living her life in the French speaking English school, her family are trying to get back to their world, which they have been trapped out of.

I loved this book and I really hope they translate more of this series because it had me totally hooked.

All the characters are believable but I think some of them can be a bit cheesy. My favourite character is Oksa's best friend, Gus. Gus was adopted and he has no special powers but Oksa makes sure he is never left out which is really nice. He is also incredibly brave!

I think the funniest things in this novel are the plants and creatures that Oksa's gran keeps. I will not say anymore about them because it will be a spoiler!

The style is brilliant but I won't go into much about that because it is translated. But the translation is really good.

Altogether, this is a fabulous novel which makes me want to read more by Cendrine Wolf and Anne Plichota. I can't wait for the next one! Whoo hoo!