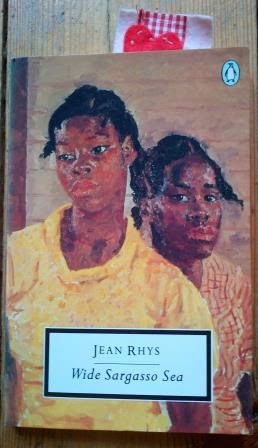 Wide Sargasso Sea was a reread for me this time, and so I’m charting my reflective thoughts on my reading journey with it. There are some small spoilers but nothing that actually ‘spoils’ a first read. This is a dense and special book, the kind that really begs to be read again and again (and I rarely read a book twice).


Wide Sargasso Sea is about Antoinette, a creole girl in 1930s Jamaica, set just after the emancipation of black slaves. Born to a white slave owner and a creole mother from Martinique, Antoinette passes into womanhood during turbulent times, and finds that her family is reviled from every side. Struggling with her own identity problems and with a history of family ‘madness’, marriage and a move to Granbois in nearby Dominica begin as a blissful escape and descend into something much more sinister.


The novel is often talked about as a companion novel to Charlotte Bronte’s Jane Eyre. Certainly, that’s how I came to first read it. It was on the reading list for an English Lit options module that I took, something along the lines of either Gender in Fiction or Feminist Fiction (because of course, they may not be the same things). Essentially, Wide Sargasso Sea is the prequel to Jane Eyre and features the first Mrs Rochester as well as the Mr, and gives voice to the mad woman in the attic.


Previous to first reading it, I’d read Jane Eyre, again for a literature course. I cannot immediately recall anything about it (!) and my recorded comments for it were ‘Disappointing’ (clearly my expectations had been somewhere quite off the mark). My comments for Wide Sargasso Sea, however, were “strange but powerful”. Additionally, I could remember much about the atmospheric Wide Sargasso Sea, although in a very disjointed way.


Recently, it popped up in conversation on Twitter. When Natasha Farrant mentioned that she had started reading it, wondering how it had never been in her life before this, I knew it was time for me to look it over once again.


Wide Sargasso Sea is a little book. I read it in just over one sitting (simply because I started it very late on a Friday night and I was past being ready for sleep). It is beguiling, and sad, and unbelievable, and stark, and confusing, and deeply rich in its imagery. Antoinette’s relationship with Christophine, and the pulls and sway of both obeah and christian religions in the novel are both intoxicating for the characters and the reader. Wide Sargasso Sea still says as much to me as it leaves unsaid and trails, in a sweetly troubling way, around my head.


Part One is narrated by Antoinette, Part Two by the I who is her husband and Part 3 again by ‘Antoinette’. On narration, I had the feeling that Antoinette also narrates sections in Part Two of WSS (but without a triple check, I may be wrong). Part 3 is perhaps the one that most directly links WSS to Jane Eyre and is my least favourite part of the novel.
I’ve heard some people say you need to read Jane Eyre first in order to understand Wide Sargasso Sea. Well, seeing as Jane Eyre had left such a weak impression on me, I do not agree. Of course, there are references in Wide Sargasso Sea that are obviously Jane Eyre, but they don’t detract from Wide Sargasso Sea as it’s very own story. As much as there’s the idea of giving a voice to the mad woman in Jane Eyre, for me, Wide Sargasso Sea is very much its own distinct – though connected – story to Jane Eyre. Antoinette’s story is compelling and powerfully told. For me, again, it is both Jean Rhys’ atmospheric language as well as Antoinette’s desire to be accepted and not treated as an unworthy foreigner, that leave the biggest marks on me.


Throughout the novel, Antoinette also recalls a dream she has, and tells it in three parts (I think, it was three). At the end, her dream becomes clear to her but it muddled a few things for me. I felt as if both she and I had experienced some sort of déjà vu and that I should have been paying more attention to her dream segments than I had (I often lose interest when characters relate aspects of their dreams!). Clearly, there is plenty left for me to explore on a third reading at some point, perhaps!
I’m currently rereading Jane Eyre (I still can’t remember anything about it! Perhaps I previously skim read it for an exam!), so it will be interesting to see whether this enhances or alters my thoughts on Wide Sargasso Sea.


My classics club challenge verdict: Absolutely a classic: it has been re-read by me and I suspect generations on will continue to explore it