We Sat Down For a Chat...with Cristina Henriquez


The Book of Unknown Americans is a very tender immigration story. I loved the coming of age thread and the inclusion of chapters from other immigrants who lived in the building. I also really admire the UK cover image, and for me it forms part of the novel's narrative. It’s author, Cristina Henriquez, chats to us about it.

WSD: In the Acknowledgments for The Book of Unknown Americans, you thank your mom for providing the story that set your novel in motion. What was that story?
Cristina Henriquez: My mother is a translator for the school district where she lives, so she works with a lot of immigrant families and she specializes in working with families whose children have special needs. She often talks to me about them and what they’re going through. One of the families she told me about was struggling to take care of their daughter who had had an illness since birth, and I found myself thinking about them a lot, about what it’s like to be a parent where the only thing that matters to you is making sure your child is okay, about the challenges of doing that in a place where you don’t know the language nor any of the customs, where it’s difficult even to figure out how to take a bus to a school meeting, and all of that somehow gave rise to the book.

WSD: In your novel, food is frequently used to signify poverty but also home (as well as 'not home'). What things conjure up images, or thoughts, of home for you?
Cristina Henriquez: That’s an interesting question. I’m not exactly sure what home is for me. When I was growing up, my family and I moved every few years, and even after I left for college and was on my own, and then when I was with my now-husband, I continued that pattern. I’ve lived in enough places that it’s difficult to think of any one of them as home. The older I get, the more I start thinking that home isn’t actually physical or geographical at all. It’s emotional, a sense of belonging, a feeling of ease and of connection. So for me, when someone asks me about my home now, I think not about a place but about people, the people I love best, the people I feel most myself around, which are my husband and children. Anything that reminds me of them – soccer, Curious George, chocolate milk boxes – conjures thoughts of home.

WSD: Why does Maribel not have a chapter in her voice?
Cristina Henriquez: I don’t have a good answer for that. Maybe I should have given her one. My idea was to give every apartment unit one representative chapter, and then beyond that I chose Mayor and Alma to be the primary narrators. Celia, Mayor’s mother, doesn’t have her own chapter, either. Her husband, Rafael is the voice for their family. For the Riveras, since Alma was already spoken for, either Maribel or Arturo could have narrated the family’s one chapter and considering how the plot unfolds, my instinct was to give Arturo the last word. Even without hearing from her directly, hopefully readers finish the novel with the sense that Maribel has gotten stronger by the end, the sense that she will go on and get even stronger still.


WSD: Yes, I think the novel gives a very strong sense of Maribel and her growth. 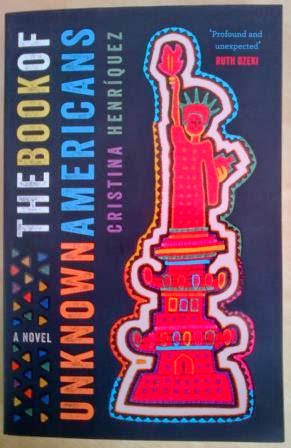 *****
Read M's review of  The Book of Unknown Americans