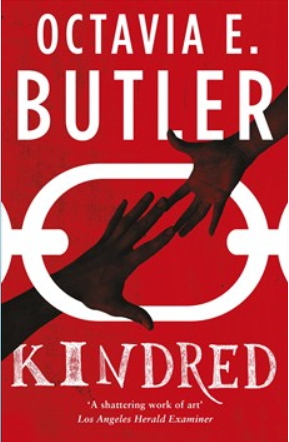 I don’t read much science fiction but am definitely one who likes the ideas more than the details or adventure that fill the plots (that probably applies to any book from any genre that I read, if I’m being honest). So, Kindred’s mix of science fiction and African American literature as a premise was irresistible for me. I’d never read Butler before, but I was definitely aware of her, most recently through Aarti’s Diversiverse blog tours which explore speculative fiction by writers ‘of color’.
Kindred delighted, surprised, informed, moved and disappointed me, all in one. In 1976, Dana, a black American New Yorker, finds herself back in the southern heartland of nineteenth century slavery, a dangerous place for any black person. The novel takes Dana back and forth over the course of these years. While these travel episodes seem connected to Rufus, a slave owner’s son, Dana finds that her ‘quest’ is a very long-sighted survival that will last for generations.
For all its enormous subject matter (north American slavery in the 1800s and time travel) – and particularly given the context of 1970s USA when it was written and published – Kindred is quietly unassuming in its exploration of love, mixed race, gender relationships and enslaved bondage. Yes, there’s the time travel aspect to the novel but this is much more a device, which presents both the writer/narrator, the characters and the reader opportunities to grapple with these psycho-social themes.
What the time travel element also enables is the idea of the ‘one woman’ that Rufus creates in his mind for Dana and Alice. Also interesting, to me, is how the characters of Kevin, Rufus and Tom Waylin contrast white men. I would have liked to have seen further developments in Kevin’s story but that at least shows that there is substance to the individual characters independent of the novel’s story.
I also liked the way Butler highlights that the pain and suffering during slavery were (and are) experienced by everyone in some form or another, and across different times and space. Of course, she highlights too how there are different levels to this experience and how some are more affecting, unequal, unacceptable and abhorrent than others. But, again, she peruses whether or not this too alters in perception across time and space. She presents no easy answers or solutions to either racial identities or historical guilt.
For shelving Kindred, I’d definitely put it in among the Toni Morrisons and Alice Walkers. But, for a completely different yet parallel reading experience, it would sit equally comfortably, for me, alongside Audrey Niffenegger’s The Time Traveler’s Wife. Love and time travel provide the similarities, but Kindred offers less of sweet romance and much more grounded depth. I’d recommend them both for quite different yet similar reasons.
Some notes for my future lack of memory (small SPOILER ALERT):
SPOILERS BEGIN:
The characters: Alice is a black slave whom Rufus loves. Kevin is Dana’s husband, Rufus is the boy she connects with, and Tom is his father. Where Dana and Alice might be seen by Rufus to embody the one woman (who is also black), the three white men might be analysed in a similar way too (Perhaps? I have not explored this)?
SPOILERS END
Publication details: Headline, March 2014, London, paperback (originally published 1979)
This copy: review copy from the publisher
Posted by M at 11:35:00 am