The Secret Diary of Adrian Mole aged 13 ¾ has followed me around for years but I’d never read it. Having achieved what seems like cult status, I popped it onto our Classics Club reading list and I thought a humorous read for our 24 hour readathon would be good. So I bought a copy (the 30th anniversary edition) and I’ve read it.


It’s written in diary form and we get to hear all the ins and outs of Adrian Mole as he enters his teenage years in 1980s Britain. Did I like it? Not especially and nowhere near as much as I'd wanted. Did it make me laugh out loud? Yes, but not as much as I wanted it too. I wanted it to make me laugh so that tears rolled down my cheeks. It didn’t do this. For other people it might (and has!). Bit of a let down for me.....but my initial expectations were very high. 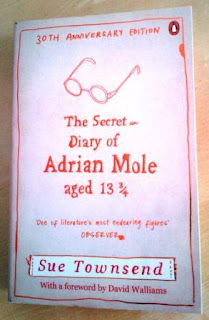 Would I recommend it to anyone else I know? My expressive face is screwing up and twisting all over the place in answer to that. Probably not. Depends on who you are and what you want. If you want to read something that defies political correctness - probably (some of the honesty is one of its strengths). If you want something that’s funny – perhaps: there are lots of funny bits but it felt like the sort of humour you find in stand up comedies or sitcoms – a bit stilted and obviously placed. Lots of one liners (for me, one of its weaknesses).

I’m sure a teacher tried to read this novel to us in primary school – but we didn’t live in Britain. I didn’t ‘get it’ back then and now I think I understand why. At heart, it’s a satire and like so many satires, it is very idiosyncratic. I often find satires too self-indulgent. If you’re researching British 1980s or lived through it, maybe you should read it. You might like it a lot more than I did.

Characterwise, I’m not sure I especially liked Adrian Mole. Apparently, he’s supposed to be an endearing character. For me, he wasn’t. There was too much about him that was unbelievable. For example, he’s a real hypochondriac; I’ve never met anyone who gets house calls from doctors so much - especially for spots! Also, the situation with Adrian visiting the old man Bert: I don’t think Adrian would have behaved that way – I think he’d have told the school and handed the responsibility of Bert back to them. I also think he was made out to be older than he actually was. His ‘voice’ sounded like an adult’s not a young teen's. This, along with the political satire and the one liners, suggested a lot of authorial presence.


Would I read the next book in the Adrian Mole series? No. It wasn't really my cup of tea - but then, I don't really like tea either!


Verdict: A classic? I’m on the fence. I don’t think it scores highly on many points of literary merit (what those are, of course, is always in debate) but I think it might be a classic example of humorous fiction that points political fingers at 1980s Britain. In this sense, it could go down as classic or cult. In the sense of it being passed on to generations of readers, it looks like some readers already do  this. After all, I found it on the shelves of two small local bookshops thirty-one years after its original publication! But, I don’t think I’m going to be one of those readers.