Bookclubbing and A World Between Us

We had our first proper sit-down-together-in-real-life-and-discuss-a book meeting!


When we first started this blog, Little M hoped it would be about sharing and discussion and a bit ‘bookclubby’. That’s much more difficult than we thought it would be – but we’re getting there. We seem to do more of that offline with real life events. We've tried a small book group with Angel Dust by Sarah Mussi, we shadowed the CILIP Carnegie 2013, and we discussed Wonder by RJ Palacio.


Recently, The Reading Agency supplied us with reading group copies of A World Between Us by Lydia Syson and we have become a little more organised (only a little !). The books came with some author and novel background notes as well as discussion prompts, and feedback forms.  It worked so well that we’re carrying on with book groups (though expect the 'form' each one takes to be somewhat different)!


Our next planned reading group discussion is Ketchup Clouds by Annabel Pitcher, again supported by The Reading Agency (Reading Groups for Everyone). If you’re interested in joining in with us online, more information on that will follow.
Here’s what we sat down together and thought about A World Between Us: 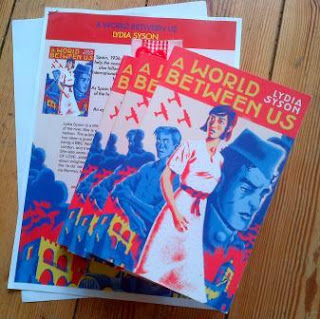 Four of us got together – it was quite difficult to find a time that suited everyone, especially with after-school activities and exams/school tests. Other than me (M), the rest of the group were 13 and 14 year olds. They all really enjoyed the novel. Please note, some of you may consider what follows to contain small spoilers – but there’s nothing major that would spoil your own first reading.


The group enjoyed the history/war/romance mix and were pleased that it wasn't a soppy romance. Even though terrible things happened in the novel, most of them saw it as a hopeful novel. They felt there were lots of surprises in the novel and they enjoyed that. The Dolores question (what she did and what happened to her) raised a lot of discussion. Felix was the favourite character. George was their least favourite character and they couldn't quite see his point in the novel other than being a plot device (getting Felix to Paris). On the otherhand, George was my favourite character! They all liked the writing style.


One of the readers hadn't quite finished the book yet (time constraints) and it was quite interesting to talk about what she thought might happen, what she wanted to happen and what would leave her in despair. The general feeling was that everyone would have been distraught if the novel had ended differently.


Towards the end, we used the discussion points that were sent to us. They weren't the sorts of topics that we would voluntarily have picked up in the novel to talk about. However, the questions led to some interesting discussions that weren't directly about the novel. There was some very deep discussion about making spontaneous decisions with long-term consequences like Felix does; considering whether killing in war is murder and what books people would/might not take to a war zone/battlefield. On the question of whether politics can be romantic, I thought that it could, but only one other agreed with me. The notion of romanticising ideological commitment wasn't felt by the others (equal split then!). We chatted for over an hour, the cake was finished, and that was that.


This was the first time a group of us had sat down to discuss a single novel that we’d all read. They enjoyed it and want to do more. So we will.
***


A World Between Us was recently Highly Commended for the Branford Boase Award 2013. You can read M's review here, Little M's thoughts here, an interview with Lydia Syson here, and see the different design processes that went into the cover here.


If you’re interested in online book discussions here are some other ones to consider:


Nosy Crow and The Guardian run a superb reading group for adults to discuss children’s books. They run a real life meeting in London which simultaneously links up with participants on Twitter (use the hashtag #NCGKids) and The Guardian online. Their next reading group book is: A Boy and a Bear in a Boat by Dave Shelton, 8 August 2013.
We Sat Down's summer book club read:
Ketchup Clouds by Annabel Pitcher.