Little M's thoughts on books she hasn't reviewed but read in 2012 that were part of a series..... 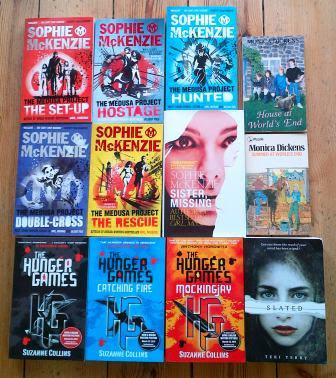 The Hunger Games trilogy - Suzanne Collins
3 books: The Hunger Games, Catching Fire, Mockingjay (all read)
A fantastic dystopian trilogy about a world that makes their children fight for their life in a game. Fantastic books.

World's End series - Monica Dickens
Have read the first two books: The House at World’s End and Summer at World’s End.
A brilliant series, set many years back but a house full of rescued animals with just kids living there. Very good books!

Slated - Teri Terry
Loving the books so far (Slated is the first book and Fractured is the second book in a planned trilogy)! It is about a girl who has had her memory wiped clean, like a slate.

Insignia - SJ Kincaid (not pictured)
Sci-fi novel about a boy who is fighting in WWlll. Brilliant series - This is the first and Vortex is the second in a planned trilogy.