We Sat Down for a Chat...with SF Said


I love it when a book starts ringing bells and making connections in my brain. Phoenix by SF Said did exactly that and I'm delighted that he's taken the time to answer my 'extended' questions! Like his novel, SF's answers are wonderful storytelling....

Phoenix creates a picture of a realised astrological space world with terrible warring, and intolerance for religion paradoxically alongside blind acceptance and faith. But the concept of creation out of destruction (e.g the Phoenix) is also there and with Mystica being the Startalker of the Present (whose special star is Aquarius), it feels like Phoenix might be an allegory for some interpretations of the Age of Aquarius? Or perhaps it's just an allegory of our time? Or something else?

SF Said: First of all, I'd like to thank you for your thoughtful and thought-provoking questions. Coverage of fiction for young people often just focuses on plot, missing themes and ideas. And while I think it's important to say up front that my goal with Phoenix was to create an epic, mythic space story – and while I did everything I could to make that story as thrilling and page-turning as I possibly could –it's refreshing to be asked to talk about themes as well!

It's quite hard to talk about Phoenix in the abstract because it's such a big book (in terms of its ambition and scope, as well as physical size!) There are so many themes and ideas and elements in it, and I think it operates on all sorts of levels. On one level, it's an exciting space story with lots of action and adventure. But I hope it also has other levels: philosophical, mystical, political, scientific… I hope that anyone aged 9 and up could read it and enjoy it, but I suspect different readers will find different things in it. A 9 year old will see it very differently to a 19 year old, and a 49 year old would see it differently again…


So I'm a little reluctant to pin down any one specific angle or interpretation. I think that's for readers to do, each in their own way. A good story should transcend its influences, and be open to multiple interpretations. I certainly wouldn't want to say that Phoenix was an allegory of any specific situation – though I hope it might have something to say about any situation where "us and them" thinking is part of the conflict. You can see that kind of thinking throughout history, and all over the world today, at every level – from the school playground to the United Nations.


One thing I will say is that over the seven years it took me to write it, there was a very strong sense of the apocalyptic in the air. In the early years of the 21st Century, we've seen so many huge conflicts with such potential for destruction; cultural and religious conflicts as well as wars between nations. All kinds of catastrophic scenarios continue to haunt our world, ecological as well as military. At the same time, there is hope that human consciousness might somehow evolve; that old conflicts might be resolved and transcended; that creation rather than destruction might prevail.


That hope is sometimes expressed in the idea you mention, the Age Of Aquarius. Astrology is something I grew up with; my mum had all the Linda Goodman books when I was a child. I'm not sure I believe in it as such, but I certainly find it interesting! Also, astrology and astronomy were one and the same thing for a long time. For most of human history, people have looked at the stars and seen pattern and purpose and even intelligence there. Astrology speaks to those feelings, I think, as does mythology. So those dimensions were important in this book, particularly as realised in Dave McKean's stunning illustrations of space and the Twelve Astraeus. If you're writing a story about the stars, those perspectives should be just as much a part of it as astrophysics. (Though I did lots of astrophysics research too - see below!)

The theme of appearance versus reality runs strongly through your novel, Phoenix: the eyeballs, the Axxa as a different species, the shadows and so on. Can you say a bit more about this and did you draw on Plato's Allegory of the Cave for inspiration? 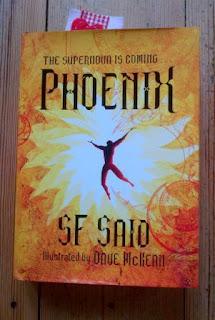 SF Said:  I can't say that Plato's Cave was something I specifically thought about while writing Phoenix, but I remember finding the idea fascinating when I first came across it.  Appearance versus reality is a great way of putting it.  I'm very drawn to the idea that things are not always as they first appear, and I think you can see this in all my books.


In Varjak Paw, it happens with the cats and dogs.  The cats think the dogs are terrible monsters… but Varjak talks to a dog, befriends it, and learns that there's more to dogs than anyone else realises.  In Phoenix, it happens with the Humans and the Aliens – the Axxa.  They're at war with each other, and they both have awful prejudices about each other.  The main character, Lucky, finds himself at the mercy of a crew of Axxa who he finds terrifying, but gradually learns that they have more in common than he suspected.


I tried to bring this theme out in lots of small, specific ways.  The scene with the eyeballs is one of my favourites.  Lucky's grown up believing that the Axxa eat eyeballs – so what's going to happen when he has to share a meal with them?  Maybe he'll find out that there's more to this food than meets the eye…  The same happens with various other elements in the book.  I hope it's a humorous and interesting way of exploring the theme.


SF Said: I can't really pick one; I like the fact that there are twelve!  You can see this in the Astral Martial Arts in Phoenix: the secret Axxa system of fighting, which has a different style for each of the twelve signs of the Zodiac.


But I'm a Taurus, myself, and I have to admit, I like being a Taurus…  Apparently it gives you perseverance, which is useful if it takes you seven years to write a book!

Did you study (or have to research) astrophysics or philosophy?


SF Said: I'll research anything that's relevant to the book I'm writing.  So with Varjak Paw, I read lots of books about cat behaviour.  And with Phoenix, there was definitely a lot of astrophysics research.  I found Michio Kaku's books very helpful, and I enjoyed watching Carl Sagan's 1980s TV series Cosmos, and Professor Brian Cox's Wonders Of The Solar System and Wonders Of The Universe.


I've never formally studied either astrophysics or philosophy, though.  Strangely enough, I studied Criminology at university!

What does SF stand for (other than science fiction)?