Portal 24 is about a secret government organisation called Oberon who only recruit teenagers as their agents. They then send them back in time to stop catastrophic events from taking place. Darius is their new recruit; he is a street-smart con-artist who has been taken from his old life to live a new one. 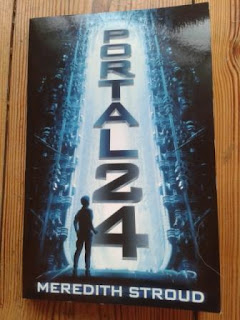 This book had me hooked from the very beginning. It wasn’t just a time travel novel that made me like it. It also had quite a lot of scientific explanation in it, which I really liked. Sometimes it could go a bit overboard with the sciencey bit but I think that was to show you how the characters felt and dealt with it all. If I was one of those kids I would be a bit baffled by it all.


This was a quick and easy read which I couldn’t put down. I think this is a very good book for someone who wants a quick and easy read.  I loved the idea of how the writer has created the time travel machine which is really cool.  At times I did think that the plot was missing something but I can't say what.
I think this novel is good for younger teens because the writing style is quite easy to read and the plot is easy to understand. It is perfect for younger teens who haven’t read a time travel novel yet.
If there is a sequel I would like to read it!


Publication details: Hot-Key Books, London, 2013, paperback
This copy: Received from publishers for review
Posted by M at 4:30:00 am