We stole..... a chat with Ally Carter (and threw in a review & a giveaway)

Today, it's all about Uncommon Criminals by Ally Carter.
We have Little M's review, an interview with Ally Carter and a giveaway!!!

I thought this book was extremely interesting because I've never read a book like this before where a 'thief' is asked to retrieve something. I really liked the baseline of this story. Kat has been asked to steal the Cleopatra Emerald so it can be given back to the rightful owners. In Uncommon Criminals there are all sorts of things going on, e.g. mystery, adventure, tracking down who Constance Miller is, a teeny-weeny-weeny bit of romance but I'm not going to say when or what because it will ruin the book.

I would read another book by Ally Carter because I really, really liked this book so I think I might like some of her others.  The book could get a little confusing at times if you haven't read the first one - Heist Society - because Uncommon Criminals talks about things that might have been in Heist Society. 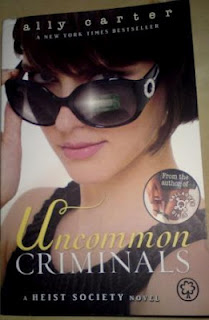 Publication details: Orchard, 2012, London, paperback
This copy: received for review from the publisher

M: Have you ever pulled a con (of any sort)?

Ally: Well, I still think that I’m totally conning my way into writing books for a living and any day now people are going to figure out I’m a fraud.  A farce.  An imposter!  So yes.  I con my readers every day.

M: Have you travelled to any of the places that your character, Kat, has visited?

Ally: I don’t get to travel everywhere that Kat goes (I wish!), but I have been all over the UK and to Italy and most of the places she has visited in the United States.  Someday very soon I hope to go to Monte Carlo which, as you know, is where a good deal of UNCOMMON CRIMINALS takes place.

Ally: I do, though I must admit to having only a very rudimentary knowledge of it.  One of my big regrets is that I didn’t at least take a class or two on the subject when I was at university.  It would have certainly come in handy this last year or two, that’s for certain!

M: Which fictional characters (other than your own) would you invite to an arty party?

Ally: Oh, the Darcys, of course!  And perhaps the entire cast of DOWNTON ABBEY.

M: Do you have any pets?

Ally: No, I don’t.  I’m afraid I travel far too much and that wouldn’t be fair to them.

M: What student organisations did you join at high school?

Ally: I was very active in a lot of things—almost every thing.  I attended a relatively small school, so almost all the students had to take place in a variety of organizations just to have enough people to keep them going.  I did speech and drama, student government, and was very involved in an organization that we have in the States to teach young people about agriculture.

M: You’ve previously won an Amelia Bloomer Book Award which honours children’s books with a feminist theme. Do you think your books send out any strong messages for teen girls today?

Ally: I certainly hope so!  I really pride myself in writing about strong girls, FOR smart girls.  That doesn’t mean never making mistakes.  It doesn’t mean not wearing pink or wondering if a boy likes you.  What it does mean is standing up for yourself and what you think is right, and trying to be someone who makes a positive difference in the world.

Thank you very much, Ally. I'm sure you're not conning anyone!

The publishers, Orchard Books, have offered a copy of Ally Carter's Uncommon Criminals to one of our lovely readers!

To be in with a chance, simply leave a comment below.

The competition closes on Friday 13 July 2012 at 3pm (spooky!!).
Winners will be chosen by random and announced on Sunday 15 July 2012. Please check back here to see if you have won (in case we are unable to contact you).

This competition is UK only. Anyone under 13 years, please get your parent's permission to enter as we will need to contact the winner for their postal address. Or get someone older to enter for you!

New comments are not allowed.