﻿﻿
Codename Quicksilver: In the Zone is about a boy named Zac who lives in a children’s home in London. Zac is a pretty normal kid, apart from the fact that he has no parents. One day he witnesses a murder; the murder of a friend of his at the children’s home. His name was Spizz.

Zac wants to find out what happened to Spizz, but is his curiosity going to get him killed? When walking back to his children’s home a girl named Rina kidnaps him and says it is for his own safety. She claims she is a spy for MI5 but does Zac believe her?  She says she’s been framed as a traitor to MI5 and that if she can get back a memory stick with some vital information she will be able to go back into MI5...
I liked the look of this book but then I wasn’t so keen on it.  But once I started the book I said, “I’m not coming away, I love this book.” So that is how much I now love this book (an awful lot). When I finished this book, I got the second book and started to read it straight away (we got given the 1st and 2nd in the series).
I love spy books and this book was right up my street. I’m not quite sure why I love spy books so much. It might be the fact that each member gets given cool gadgets or it might be because I love the action in them too.
I would recommend this book to people who watch MI High which is a TV program on CBBC.  I would also recommend it to people who love spy books or spy films e.g. James Bond or Johnny English.  Age category -  I don’t really know.
In this book there is a tiny bit death at the beginning, action, adventure, gadgets and, of course, spy fiction.
The second book, Codename Quicksilver: The Tyrant King….I can’t say what it’s about because it gives away the end of the first book but in one of the paragraphs it made me think of pancakes (I’m not quite sure why): “A host of competing scents wafted on the breeze. The tang of fresh fish, and ripe fruit from the open market stalls. The smell of hot tyre rubber on tarmac, and food being cooked in the seafront restaurants and cafes” (p.98). Then I had the craving for pancakes so I went and made some……
I absolutely loved this book too.

Publication details:
Orion Children’s Books, 2012, London, paperback
Our copies: received for review from the publisher
******
And here's Allan Jones, telling us all about the gadgets in Codename Quicksilver series: 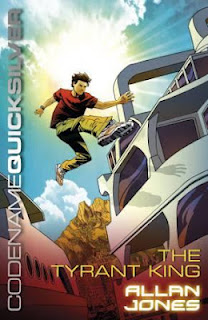 "The teenaged secret agents of Project 17 who appear in the new spy series Codename Quicksilver get sent out on some pretty tricky missions. They are asked to track down and confront the kind of people that us ordinary folk would do anything to avoid. Bad people. Dangerous people. Murderous people. They have to locate and defeat people with guns and bombs, and sometimes people with far more dangerous weapons – lethal devices that can kill thousands of people at the press of a red button or the click of a mouse.

Being super-fit and highly-skilled in martial arts such as Brazilian jiu jitsu, win chung and crav maga are vital, but there are times when even the most determined and expert spy needs a little something extra to call on in moments of particular peril.

The scientists who work in the Research and Development branch of the specialist and elite MI5 department known as Project 17 have come up with some handy gadgets to help their agents out when all else has failed. Some are defensive, some are offensive – but they have all been specifically designed to be portable and easy to operate in the field, whether that field happens to be the roof of a high-rise building in a big city, the roof of a speeding train, the middle of the ocean or a tunnel leading to a terrorist mastermind’s secret headquarters dug out under a mountain.

﻿The scientists (‘white-coats’) at Project 17 give their creations official names such as the SGD706/EO3. But who’s going to remember that in a moment of crisis? “Hand me the SGD706/EO3, please?” I don’t think so. The young field agents have given the gadgets nicknames that are far easier to remember. Tags such as Snakescope, Whizzer, Flash, Chewing-gum and Fluze.
The Zipper. This is a smallish grey metal box, about 20cm x 15cm x 8cm. It’s lightweight and fits easily into a backpack. It has heavy-duty clamps at one end that can be used to attach the Zipper onto almost any fixed object – the lip of a rooftop, the frame of a window – a metal gantry. Two flexible and micro-thin steel cables come out of the other end. A webbing strap can be attached to the cables to act as a harness – because the Zipper is a quick way of getting up and down vertical surfaces. It works on a powerful xenon fluoride battery and can winch two people at a time up or down a ten-metre drop. Handy for making a quick exit if you’re in trouble.

Then there’s the Whizzer – a black ball about the size of a table tennis ball. The Whizzer is made from two halves that lock together. It is armed by twisting the two halves. Then you need to throw it really quickly, because ten seconds after it has been armed, it splits apart and emits a blast of thick white smoke as well as some really loud cracks and bangs and electronic screeching noises that will blind, deafen and disorientate anyone within five metres of it. A handy thing to have in your pocket in a tight spot.

Then there’s the Hotscope and the Kiss and the Ret-Det – not to mention probably the most important device of all: the standard issue Project 17 Mob. But if you want to know what these gadgets can do for an agent in the field, you’re going to have to read the books.

What kind of gadget would you like to invent? What would it be used for?"

Orion Children's Books are offering 3 lucky readers the first two books in the Codename Quicksilver series, In the Zone and The Tyrant King.

3 winners will be chosen by random and announced on this blog on Sunday 22 July 2012. Please check back to see if you have won (in case we can't contact you).

This giveaway is UK only. If you are younger than 13, please get a parent's permission to enter - or ask them to enter for you. The books will be sent direct from Orion Children's Books.