We Sat Down for a Chat with Patricia McCormick

Patricia McCormick is the author of Never Fall Down, a moving and honest novel that tells the tale of Cambodia's brutal Killing Fields from the perspective of a child soldier. Never Fall Down is inspired by and based on extensive research conducted with Arn Chorn Pond, a  survivor and ex-child soldier.

M: What inspired you to write Never Fall Down?

Patricia McCormick:
I heard Arn speak about his experiences as a survivor of the Khmer Rouge and as a child soldier and saw how much he still suffered when he spoke. It was as if he became that frightened child all over again; he would shake and weep, sometimes uncontrollably. I was very moved by his courage and honesty and thought that if I could capture that story safely between the pages of a book, he wouldn’t have to relive those experiences every time he spoke. He would be able to speak, as he does so eloquently, about the healing power of music and about his work as a peace activist.

And, indeed, I’ve seen a change in Arn since the book came out. It was very powerful for him to have readers bear witness to his experience and I think it has helped him move beyond his past and deepen his healing. He seems to me to be much more of a man, firmly rooted in the present, and less a terrified child. 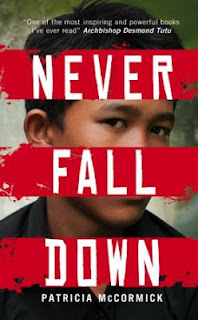 M: How did you meet Arn?

Patricia McCormick:
A neighbor in my apartment building introduced us. I was living in a small building, full of artists and writers – it’s called Meade House because Margaret Meade once lived there – and we often had pot luck suppers or drinks together. Not your typical New York anonymity. My neighbor had been active in the peace movement for many years, knew Arn and knew Arn needed help recording his story.


M: What was one of the most memorable aspects of your trip to Cambodia with Arn?


Patricia McCormick:
One thing stands out: Our visit to Wat Aik, the prison camp where Arn was forced to witness the killings of hundreds, of innocent people and where his music was used to cover up the sounds of those killings. He had been able to locate a handful of fellow survivors, men who had played in the band with him. When we stepped onto the grounds of Wat Aik, it was as if the men were seeing ghosts. They pointed at various places – the path to the mango grove where the killings took place, for instance – as if the were seeing prisoners being marched to their deaths. Their memories which had been sort of freeze-dried for some 35 years suddenly came to life and they were overcome with fear, then sorrow and then a kind of peace. The peace, I think, came from the understanding that their experiences would not be forgotten because of the book.

We also had a lot of fun – as the men grew to trust me they played tricks on me, getting me to eat fried ants, for instance.

M: So much of this novel is based on true events. Arn and many of the key characters are based on real people. What aspects make it fiction?

Patricia McCormick:
Arn has a remarkable memory. And I cross-checked the veracity of his story with independent witnesses and archival material. But no one can remember, in a linear way, the events of 35 years ago, especially not a child who is in the midst of a genocide and is being manipulated by his captors. Death became so commonplace that Arn often had to dissociate – numb himself to all human feeling – just to survive.

And so, for instance, he can recall the eerie ‘click’ of a landmine being sprung. He can recall the stench of a gangrenous leg. But he has supressed the memories of his fellow child soldiers stepping on landmines, in part, because the experience was so commonplace, in part, because it was so terrifying. And so I created a character – a little girl who carried rice for the soldiers – and introduced her on, say, page 123. The reader grows to care for her as the chapters go by, so that when on page 157 or so, she steps on a landmine we care deeply about her. She is not a random, forgotten casualty or a statistic; she’s a person. And then, I would use Arn’s very distinctive voice to reflect on the experience: “Now, even the earth is our enemy.”

Whenever I had a fact, I used it. When I didn’t I made use of a pastiche of fact, fiction, memory and imagination to create a feeling of authenticity.

M: Music is a central thread in Never Fall Down. Can you tell us a bit more about the place of music in Arn’s tale?

Patricia McCormick:
Arn came from a family of opera singers and performers and he came from a town that had a very lively rock n roll scene in the early 70s. He grew up singing Beatles songs and dancing the Twist. The Khmer Rouge extinguished both the traditional music of Cambodia and everything ‘foreign’ because they saw self-expression as a threat.

Music also saved Arn’s life. By volunteering to play an instrument in what turned out to be a propaganda band, he was spared the grueling work in the rice fields, work that killed many children. But the Khmer Rouge also cruelly distorted music; they used Arn’s music to cover up the cries of the dying. And this participation in the killing, however unwitting it was, left Arn with enormous guilt.

(It was also partly through popular music that Arn learned to speak English when he came to the United States  - Cyndi Lauper, Bruce Springsteen, etc.)

Mindful of the role that music had played in his life, he returned to Cambodia to find the few master musicians who’d survived the genocide. (The Khmer Rouge had targeted artists and intellectuals, killing 90% of the musicians.) He paired these musicians with young street kids so they could learn the classical music of Cambodia – music that would have died out with that generation.

Arn’s vision of peace and healing through music will come full circle next year when those musicians and their students perform at Lincoln Center in New York.

M: Is there anything else you’d like to add?

Patricia McCormick:
One of the biggest challenges with the book was finding the right voice and perspective. After several false starts, I went back and listened to my taped interviews with Arn and realized that what was missing from my earlier attempts was his voice – his unique, quirky, improvised English. It is that voice – that of a child who is at turns mischievous, bewildered, terrified, canny and kind – that makes the horrendous experience endurable.

You can visit Patricia McCormick at her website here.