We sat down for a chat...with Jeff Zentner

Jeff Zentner is the author of debut The Serpent King, a warmly funny, charming and moving young adult novel that I couldn't put down. After reading his novel, and looking over his website, I'm delighted to have asked him a few very random questions. 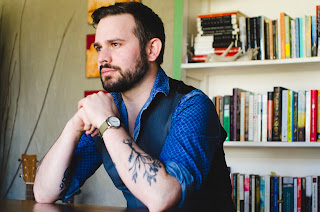 Jeff Zentner: I would rather walk slowly down a busy street completely nude, with people pointing and laughing and trying to hit me in the butt with darts than ride down the same street on a Segway.

WSD: You have 9 tattoos! I have none. Tell me about yours and make it sound interesting (but be sensitive, I'm scared of needles).

Jeff Zentner: It's actually 11. Many have very long, boring stories. I have one I got to commemorate appearing on a recording with two of my musical idols, Nick Cave and Iggy Pop. One I got when I decided to become a writer, to burn the bridge behind me and force me to go through with it. I have both of my book titles in my title font. I hope this sounds interesting. They were all done by, uh, a...pirate captain? There you go.

WSD: Yes, that sounded interesting. But, do you like snakes (like needles, I'm also afraid of spiders)?

Jeff Zentner: Not especially, but nor am I especially afraid of them.

Jeff Zentner: I love how durable and nondisposable they are. I use one from the 1940s on a daily basis. You can see the marks where a human being hand-filed down a rough spot. There's something poignant to me about creations that endure and endure. Plus, they're a southern cooking tradition and food made with them tastes really great.

Jeff Zentner: I do, but I've read very few. Harry Potter. Lord of the Rings. Game of Thrones. That's about it.

WSD: We know you like music. You can wax lyrical for a bit now.

Jeff Zentner: Music was my first love. It was the thing that made me believe I had something beautiful to share with the world.

WSD: Did you ever want to leave Tennessee (I'm assuming you grew up there)?

Jeff Zentner: At times, and I tried, but I came back. This is my home.

WSD: And here, you can answer a question I haven't asked.

Jeff Zentner: Why yes I do have another book out soon! GOODBYE DAYS will be out in March!

WSD: So there we go - another book out this month!

The Serpent King was nominated and has been longlisted for the 2017 Carnegie medal.