Working my way through this year's Carnegie nominations list, The Serpent King wasn't at the top of my to-read list. The first page was good but I wasn't too sure about the plot and its religious themes. Plus, I've tried to approach this year's longest with a blank slate (ie. avoiding reviews etc) and I've done quite well. Except for the The Serpent King. And especially once it won the Morris award. I picked this book up not because it appealed to me but because of the favourable criticism it was receiving. 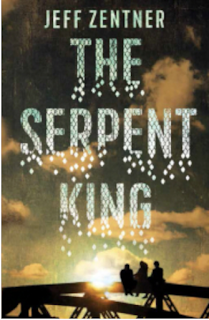 One of the best things, for me, about The Serpent King, was that it's a novel that I wanted to go and on. I was sad to finish it. At the end, I felt like I knew the characters and I wanted to hear more about their stories. This doesn't happen to me very often anymore (it happened a lot when I was a child/teen reader) so I was quite delighted.

The Serpent King is primarily Dill's story. He's in his last year at high school, he lives with his mother in poverty stricken conditions, and his father is a religious extremist who's in prison. But, Dill's story is very strongly interwoven with his friends Travis and Lydia such that this is also a novel about a friendship trio in rural Tennessee.

All three characters are very likeable and quite different from each other. Some wonderful dynamic tensions are played out. Character and friendship-wise, The Serpent King is reminiscent of the styles and interests of other American authors like John Corey-Whaley, John Green and Pat Schmatz.

What seems particularly distinct, for me, about this novel is the unflinching space the plot gives to an extreme religious faith. Dill's parents are fanatical and, in turn, this has made pariahs of them: not something that's easy to deal especially when you're a teenager. While the narration does not necessarily endorse this way of life, it gives it a very respectable, almost judgment free space. On the other hand, it balances it with Travis' religious family and Lydia's very educated middle class family.

This novel is full of some sincere and some (slightly) overplayed tragedies, a handful or two of good and bad luck, buckets full of dorky vintage love, a spot of glamour, and making tough and brave decisions. Hugely recommended and I'm keeping my copy.

Oh, and it's in third person - if that's the kind of thing that matters to you.


Publication details: Andresen Press, 2016, London, paperback
This copy: received for possible review from the publisher
Posted by M at 11:36:00 am