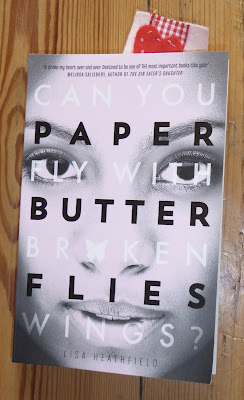 The novel starts with June when she is ten and where we find that she is heinously bullied by her stepmother, Kathleen, and stepsister, Megan. Her stepmother’s behaviour towards June is so awful, it’s really unbelievable. She can’t be doing that, can she? And me asking myself this question is important because it holds a central point of this novel. Will anyone believe a child who claims an adult is doing this to them? Nobody could be so cruel, could they? And if she is, then Kathleen must be a monster.

A few years ago, I read Blood Family by Anne Fine, which also explored child abuse. It was a really dark read and it’s an understatement to say I was not particularly fond of it. I was worried that Paper Butterflies would have the same effect on me, but it didn’t.  It didn’t because Paper Butterflies – although teen novels don’t get much darker than this – threw in a beautiful and enduring hope. This came in the form of a home-schooled boy who made paper sculptures in a field of old trailers. His name was Blister and he lived with the chaotic family of Wicks.

Blister is a fantastic character. He’s welcoming, fascinating, thoughtful, kind – and he’s often scared (of the dark and rollercoasters). He is just what June and the reader needed. Together, June and Blister form a fictional relationship that, for me, rivals that of Maddie and Queenie in Elizabeth Wein’s Code Name Verity (also published by Electric Monkey!). While this is a novel that explores difficult physical, psychological and moral issues linked to abuse, it is also a novel about a beautiful and blossoming friendship.

Paper Butterflies is straightforward storytelling and the writing flows effortlessly. A before/after structure adds a little suspense to the plot but it also offers the reader some clues as to where this novel might take them.

I finished this novel and went to sleep but I kept waking up in the night playing things over in my mind. Notably, this is not a customary habit of mine in response to a novel. But here I was, pondering and a bit heartbroken. I really wanted time to turn back - for June. Oh yes, this was a fiction. I forgot.

Some questions that the novel raises (for me)

Paper Butterflies has been nominated for the Carnegie Medal 2017.